The Litle P and Sandslash Comic is a comic based off of the Litle P and Sandslash Series' original form. IT includes scrapped characters and stories in it. However, the creator has stated that any inside jokes will be "explained" by various means, such as adding dialogue. The comic will features issues that were previously stories, one example is Litle P and the Egg. The series will also incorporate arcs focused on Sandslash. It will also feature characters from the series's sister series, the Team Pokepals Adventures, which have not been featured on Fantendo.

The comic will be started after Max2 has time, probably around the holidays. The first issue, however, has been released early. 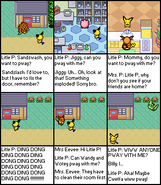 Issue 1
Add a photo to this gallery

The first arc, Cleffa has gone missing! This arc serves more to explain some of the things that the Fantendo series has left out or barely mentioned.

Will be updated as more characters are introduced. This contains characters up to Issue 2.