A lean Hylian boy who barely stands over four feet tall, Link has a generous mop of fluffy, dirty blond hair on his head, bright, sapphire-blue eyes, and slightly tanned skin from being out in the sun so often; he also has faint freckles on his cheeks, the bridge of his nose, and on his shoulders from sun exposure. He is one of the only other living Hylians (apart from Princess Zelda) that bears distinctively large and pointed ears.

He typically wears an off-white sleeveless tunic with a belt around the waist, darker-colored pants, brown boots, and a pale blue ascot.

When Link was only an infant, not even a year old, his mother was infected by the Luxbane, and in her desperation, she fled into the woods surrounding Murphey's ranch, seeking out the help of a gifted healer whom she knew resided within the forest. The foul plague eating her alive stole the bulk of her energy, however, and she ended up collapsing, unable to go any further. Fortunately, however, she was found by Murphey, and she begged him to take her son, as she knew that she was not long for this world.

Murphey's heart went out to the poor woman and her infant son, and he readily agreed to take her child, named Link, to safety. The mother's last request was that Murphey put her out of her misery. This was a task he was much less willing to accomplish, even though he knew he could do nothing else for her; it was either end her quickly or allow her to suffer an agonizing death. He realized that he had no choice, as horrible as he felt for striking the dying woman down with his blade.

After ending her pain, Murphey quickly took the infant Link back to his house, where he raised him as if he were his own flesh and blood. He was curious of the fact that both him and his deceased mother had distinctively pointed ears, and felt in his heart that the boy would grow up to be something special, as pointed ears on Hylians were nigh unheard of nowadays.

Even though the demise of Link's biological mother would continue to weigh heavily on Murphey's mind for a long while, he was determined to make sure her son was raised in safety, love, and care. The boy was a bright and curious one, and he had quickly bonded with Alice, a young mutt Murphey had adopted when she was only a puppy. The two were rarely apart, and Alice seemed to consider herself the boy's guardian. Both of them grew up alongside each other, under Murphey's watchful eye.

As Link grew older, he helped his adoptive father out around the ranch, learning new skills while also satisfying his need to be active.

Spoiler warning: Massive spoilers for the entirety of "War of Light and Shadows" below (or at least the more significant events).

One day, Link, venturing past the fence of the ranch in order to retrieve stones for his slingshot (which he was practicing with), heard what sounded like a twig snapping underfoot. While initially unnerved, he assumed it was just a fox or some similar animal, until Alice started to growl at something unseen beyond the fence. This, of course, made him even more uneasy, and he hastily returned to the ranch while also attempting to reassure Alice that the noise was nothing to worry about... even though he didn't entirely believe that himself.

Legend of Zelda: War of Light and Shadows

Helping Murphey out on the ranch so often has kept Link in good physical shape, and as a result he has a good amount of stamina on hand, more than one would expect from a relatively scrawny boy. He's quite agile, and can climb trees, fences, and whatnot with relative ease, although his overall physical strength is only slightly better than the average Hylian boy, due to his relatively lean stature.

He's creative and resourceful, having built a surprisingly well-crafted slingshot all by himself, and has knowledge of both woodworking and sewing (both taught to him by Murphey).

A brave individual with a heart of gold, Link is generally what one would expect a child his age to be; extroverted, creative, and somewhat naive. He's generally friendly towards everyone he meets (unless he can sense that they're malicious, or that they outwardly appear to be so), and loves animals dearly.

He is heavily altruistic, and typically refuses to abandon anyone in need, even if it would benefit his well-being to leave the situation; this altruism sometimes extends to those antagonistic to him (within reason, of course). He has an incredibly stubborn will, and sometimes acts without first thinking things through, which has gotten him into trouble on plenty of occasions.

Link's a bit cocky at times, and isn't above showing off if the mood suits him, but generally tries (key word: tries) to retain a modest disposition. He has considerably high empathy, and if he senses that someone he cares about is upset, he'll put in a great deal of effort to try and make them feel better. He's also highly protective over his friends and family, and threatening to harm them is a good way to bring out his wrath; of course, this anger will also cause him to act more rashly, as well.

Despite his inherent bravery, he's still a child, and quite prone to cracking under pressure, or quailing in the face of things much bigger, meaner, and more powerful than he is; while he'll fight his hardest past his fears and hesitation, any particularly intense event is likely to stick with him for a long while. He has a habit of trying to hide any pain (physical or otherwise) that he's going through, since he doesn't like to make people worry, especially if they're close to him.

Possible design for Link in the Hero's Garb 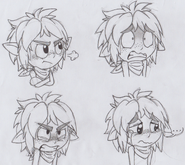 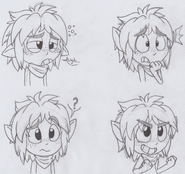 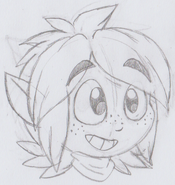 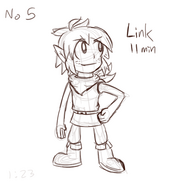 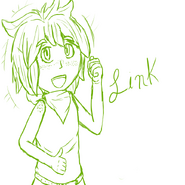 Drawn by FlamingoPhoenixFeathers (t∣b∣c)
Add a photo to this gallery
Retrieved from "https://fantendo.fandom.com/wiki/Link_(WoLaS)?oldid=2925138"
Community content is available under CC-BY-SA unless otherwise noted.