This page may also be referred to as "Adult Link". For other variations of Link, see Toon Link, Young Link, Wolf Link, and Gerudo Link.

Link is the collective name referring to the incarnations of the main protagonist of the Legend of Zelda series, created by Shigeru Miyamoto. All Links possess the Spirit of the Hero, chosen by the Goddesses to wield the Triforce of courage. His purpose is constantly driven by "fate", intertwined with the other holders of the Triforce, Princess Zelda, and Ganondorf, where he is destined to save Hyrule from threatening forces. (Which forces seemed to be controlled by Ganondorf mostly all the time)

Each incarnation of Link is given a definitive name to differentiate one from the other, most notably Young Link from Ocarina of Time, and Majora's Mask, Toon Link from the cel-shaded art style series, through respectively.

Link has appeared as the main character in ever Legend of Zelda game to date, and is recognised as one of Nintendo's great mascots, and the representation of, not only the Legend of Zelda franchise, but the Video Gaming industry as a whole.

The Legend of Zelda

Link is the hero that the goddess Lana speaks of, and is the bearer of the Triforce Of Courage. Link has a bond with Zelda and her friends, and is voiced by Elijah Wood. He sets out to stop Ganondorf from conquering Hyrule.

Link saves "Zelda" from falling off a tree and marries her. They currently have a son named Zypher and live in the Mushroom Kingdom.

Link is a confirmed playable character in this game.

Link is a playable character in Hyrule Heroes. He attacks with his sword, and blocks with his shield. He is a pretty balanced fighter.

Link is a playable character in Nintendo Heroes. He is captured by Wario and used as bait to capture Mii and the rest of the gang. He is tied to a tree, and while the gang rushes forward to help him, Wario launches a bomb which knocks them all out, except for Link. It burns the ropes, and so Link fights Wario. Halfway through the battle, the gang gets up and starts to help him, which leaves Wario outnumbered. After defeat, an army of Goombas appear, and he fades into dust. He adventures with the gang for the rest of the game.

The Legend of Zelda: Mystic Beginnings

In The Legend of Zelda: Mystic Beginnings, Link is one of the playable characters in the game. However, this game starts a reboot and shows a diffrent battle gameplay-style as this is Link's first official mission. Link has to save Princess Zelda and stop the pact of the vile criminal Ganondorf and Hyrulian figure Lord Bardgen to taking over Hyrule.

Link makes his debut in the Mario Singalong! Series in Mario Singalong Legends! when Mario and his friends come to Hyrule and Princess Peach is kidnapped by Ganondorf Link wants to help but Zelda requests that she stay with him, Mario insists he can do it by himself anyway.

The Legend of Zelda: The Sun King

In the direct sequel of The Legend of Zelda: Mystic Beginnings, Link is the main playable character as he searches for the mysterious Sun King, who disappeared right after the events of Mystic Beginnings, in order to stop a evil sorceress from taking over Hyrule's sister city, Solaris.

Link appears as an ally in Pikachu's Final Destiny 2, helping Pikachu and company to clear a harder level.

Link appears in Renan!, where he works with Mario, Sonic, Kirby, and the rest of the protagonists in China.

Mushroom Kingdom Hearts: The Other Land

Link appears in Mushroom Kingdom Hearts II: The Other Land.

In Mario Kart DS: Tag Team Racing, he teams up with Zelda in the game. Their Team Item is the Triforce, and Link's special kart is the Eponia Clopper.

The Legend of Zelda: The Underground Tale

Link, Zelda, and one of their close friends named Rononzo who looks like Gonzo and Alfonzo from the Toon Zelda series find a mysterious kingdom hidden beneath Hyrule called Terenialia which its theme is a mix of medieval and steampunk.

The Legend of Zelda: Dual Destiny

Link has to save Zelda again and this time has to cross seven new kingdoms that have never been in a Zelda game before. These kingdoms are all scattered across the world.

New to the series, he is ambidextrous and thus can wield dual blades and can be armed with two shields.

Link is the main protagonist of The Legend of Zelda: The Shadow King.

In Smash Tactics, Link is the hero of the Hylian team. He is very slow but has got high strength.

Link has been announced to be a default veteran in Super Smash Bros. Brutal Duel.

Link is one of the main characters of Super Mario and Friends :Zennu Quest. When Princess Peach learned about Mario's and his companions' disappearance, she sent Link and Team Sonic to save Mario.

Link appears as a downladable character for $2.99.

Link is a returning veteran in SSBUF. He confirmed to appear on May 25, 2018 along side the rest of the original 8. He is playable in his Twilight form, OoT Form as a pallet, Young Link, Toon Link, & the new BoTW Link

Link appears as a playable character in Jake's Super Mario Kart. Unlike in Mario Kart 8 and Mario Kart 8 Deluxe, Link's default design is based upon the Champion Tunic from The Legend of Zelda: Breath of the Wild and, unlike in the latter title, he does not have his green tunic as a separate outfit.

Link appears as one of Princess Lara's bodyguards in Captain N: The Game Master and it is specified that he is in a relationship with Princess Zelda. When Kevin Keene appears in Videoland he is very skeptical about him being the hero that is supposed to save all of Videoland and so he sets up a series of challenges for him to prove himself, even once Kevin passes all the challenges Link is still worried about him.

In the original cartoon in which the game is based off Link was only a minor character however here he is upgraded to a main character and has a much more stoic personality. He is a hero and continues to serve as part of the N Team out of obligation to Lara. He and Kevin frequently quarrel over Link being a Hylian, not an elf.

Link appears in The Legend of Zelda: The Shadow King as the main protagonist.

Link is a playable character in Super Smash Bros. for the arcade. He has two forms which feature the Champion's Tunic from Breath of the Wild and Hero's Clothes from Twilight Princess. Combined with both forms, there are 20 palette swaps altogether.

Link is a playable character in Zelda x Super Smash Bros., a game containing everyone from Hyrule Warriors. He has two forms which feature the Champion's Tunic from Breath of the Wild and Hero's Clothes from Twilight Princess. Combined with both forms, there are 20 palette swaps altogether.

Link is one of the main protagonists and a playable character. 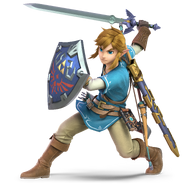 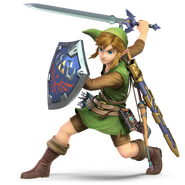 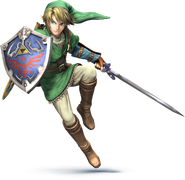 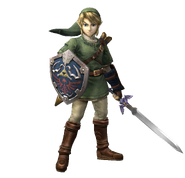 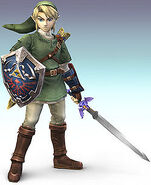 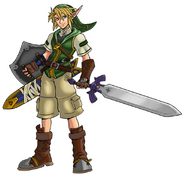 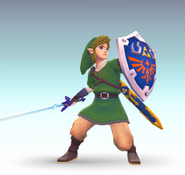 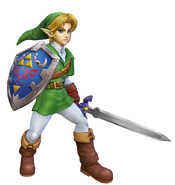 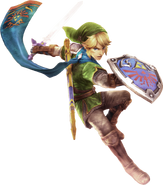 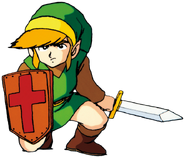 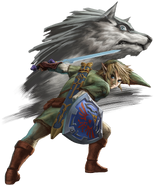 Link's Appearence in Breath of the Wild 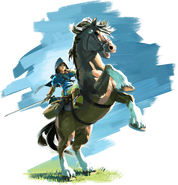 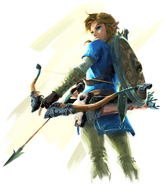 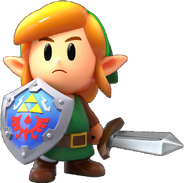 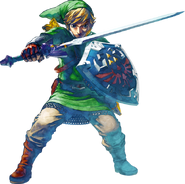 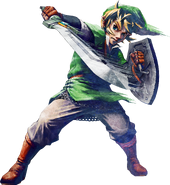 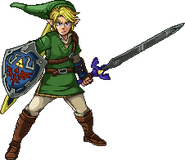 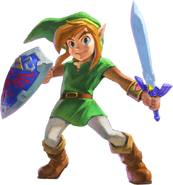 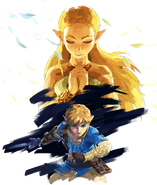 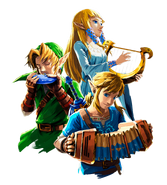 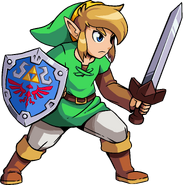 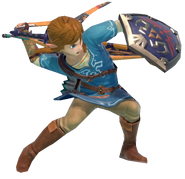 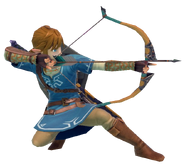 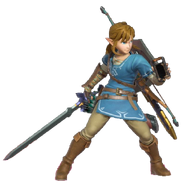 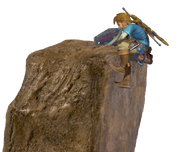 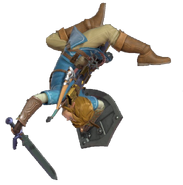 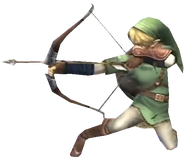 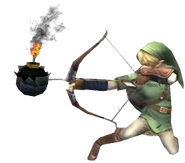