If Mario has the Lightning effect, he can shoot lightning bolts and lightning balls at nearby foes. In New Super Mario Bros. Omega, enemies would be stunned instead, although weak foes could be killed after one touch when stunned. Even bosses could be stunned, as long as they're not big. It can destroy Spike Balls, Bullet Bills, Chain Chomps, Bob-ombs, and pretty much anything that is metallic. It can destroy anything that is electrical, like Amps and Bowser Amps, overloading the enemie's system with lots of electricity (but in this case, is necessary throw more than one lightning ball).

The lightning balls also bounce longer than fireballs. First, they bounce high, but bounces lower and lower after every bounce, until the bounce is so low that it actually "moves on it's own". Then it turns into a small shock and disappears. But in Karting games like Mario Kart Wii the lightning flower will shrink opponents.

In Super Mario Adventures II and Super Mario Bros. Power-up Chaos, it showed as an item that only Mario and Luigi could use to transform them into their Lightning forms. One of these Flowers would appear if one of the Bros. touched a Lightning Cloud. If Wario or Waluigi touched one of those clouds, the cloud would simply disappear.

In Super Mario Bros. V, the Lightning Flower is an item that allows the Playable Character to shoot lightning balls. It's a common item. Potions can also boost the powers of Lightning Mario, Luigi, Yellow Toad, Bowser, & Princess Peach.

In Super Mario: Elemental Journey, the power-up reappeared as a exclusive power-up for Luigi and Princess Daisy. If the player collected enough Thunder Stars, Luigi and Daisy could use new abilities that would let them progress further into the game as well as break colored brick blocks containing Thunder Moons and blocked off access into secret areas. 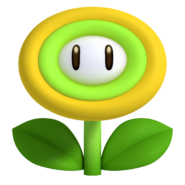 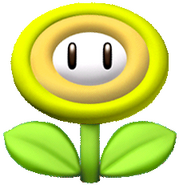 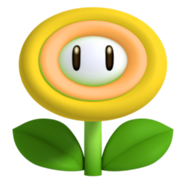 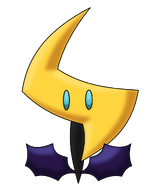 A Newer Iteration of the Thunder Flower 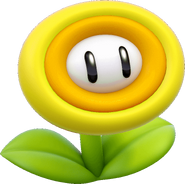 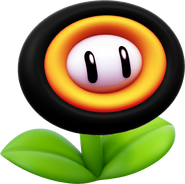 The Thunder Flower, as seen in Super Mario Stars and New Super Mario Land.
Add a photo to this gallery
Retrieved from "https://fantendo.fandom.com/wiki/Lightning_Flower?oldid=2774080"
Community content is available under CC-BY-SA unless otherwise noted.