It evolves into Lickilicky when leveled up while knowing Rollout.

Lickitung is a bipedal Pokémon with a round body and a thick, powerful tail. It has soft, pink skin with curved yellow lines on its belly and yellow ring markings on its knees. It has a thumb-like claw on each hand, and a single large nail on each foot. There is a yellow spot on its palms and the soles of its feet. It has beady eyes and a long, prehensile tongue. The tongue is likely connected to its tail, which twitches when the tongue is pulled.

At over 6'6", Lickitung's tongue is twice as long as its body. Sticky saliva coats its tongue, which causes a tingling sensation when touched. It is used for cleaning, capturing prey, and exploring its environment. Lickitung remembers things by their texture and taste, although it apparently dislikes sour things. The tongue is both dexterous and powerful enough to lift people, as seen in the anime. Lickitung can be found in grassy plains and meadows.

It may have been based on any number of lizards with extending tongues, particularly the blue-tongued skink or maybe even chameleons. It also shares traits with anteaters. Lickitung could also be an Iguanodon, as it shares its characteristic "thumbs" with it.

Lickitung is a combination of lick and a corruption of tongue.

Beroringa may be derived from べろ bero (tongue), ベロベロ berobero (onomatopoeia for licking), and possibly ring (referring to the patterns on its body) or a corruption of the English word lingua (which refers to a tongue or an organ resembling a tongue). According to Pokémon Black and White's television program PokéQuiz, "Berori is the sound of licking in Japanese!" 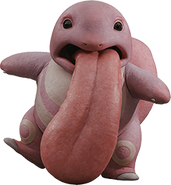 Generation VI
Add a photo to this gallery
Retrieved from "https://fantendo.fandom.com/wiki/Lickitung?oldid=2951435"
Community content is available under CC-BY-SA unless otherwise noted.