Lichess Molybdenum (also known as just Lichess or Madame Muerte) is a self-proclaimed "goddess of death" that travels with The Haded, her servant bound to her every whim. Lichess Molybdenum is a night elf from Huxxabu and has Abyssal powers that allows her to split pieces of undead beings and attach them to the living, blurring the lines of both life and death. Her dominating presence makes her a powerful figure among the dead, despite not being dead herself. She is the leader of Team Draugr and was intended to debut in the G3 Supercard tournament storyline. She was created by Exotoro (t∣b∣c) as the leader of a team that heavily uses the Spirit Universe lore in a interesting way, but also created to be a dark parallel of Asuna.

Lichess Molybdenum is a powerful figure among the dead, despite being very much alive due to her Abyssal being used to surgically pluck at the undead for pieces to implant in the living as a means of control. She calls herself a "goddess of death" due to her ability to control the dead/undead and bend them to her whim. Her power comes from the powerful spirit known as Glámr, which she is looking for a direct host that can take full advantage of the power they provide.

Lichess Molybdenum is a white skinned night elf with short pointed ears. She has blank white eyes with green eye makeup. She has platinum white hair that goes down past her shoulders but is cut short enough to not hit the waist area. She has green sharp nails. She wears a skimpy outfit that is fairly revealing, featuring several ribbons strapped across her body, with a green one resembling a pentagram across her chest. She wears puffy detached sleeve cuffs around her upper arms and high leather boots. This gives her a dominating look.

To her side at all times is Glámr, a spirit that appears in the shape of a burning green skull with flames coming out the back and out the eye sockets.

Lichess Molybdenum has a very playful and dominating personality, seeing herself as a goddess of death (although she is not actually close to a deity in terms of power) and controlling those she sees fit with her powers. Her attacking style is actually fairly impersonal, hardly landing physical blows on her opponent in favor of sending out the spirit Glámr to attack or dealing projectile damage with her emerald colored Abyssal. She has a cold heart, only seeing her servants as tools to attack for her or to serve her in other means that are for her benefit almost exclusively.

Her power is also not really her own. Her Abyssal stems from a lack of life from Glámr, and she directly controls Glámr and uses their power for her own needs. This leads to an overconfidence in abilities that aren't even her's to begin with. While she is rather cold, she does so in a playful way. She seems to find those who attempt to impress her or carry attraction to her as rather entertaining- she mostly strings people along to convert them into her undead army.

She is genuinely attracted to power though- as such she sticks with Glámr out of somewhat out of a infatuation with them. This isn't really expressed openly, but it is part of her goal to find a suitable host for Glámr to express what she believes is romantic feelings for them but also a powerful servant that they can order around. She is also fairly intelligent, able to spot schemes to stop her a mile away and puts a stop to them in a inconspicuous way.

She also seems to have a hobby for motorcycling, owning a motorcycle and often showing up to events on one. She also appears to like strawberries and roses, using the thorns of a rose as a skewer to eat strawberries off.

Lichess Molybdenum has emerald colored Abyssal that is sourced from a lack of life around her. The more undead or corpses around her, the more powerful she becomes. She uses the Abyssal to control Glámr, a powerful spirit that remains as a floating skull, implied to have been part of a even stronger spirit but was disconnected from the rest of their body that remains in a vacuum seal. She can use the Abyssal to a surgical precision, able to cut off pieces from Glámr and then insert them into dead bodies with very specific conditions.

It is implied Lichess Molybdenum knows Tobura and her forces. They seem to have a friendly relationship although have seperate goals. 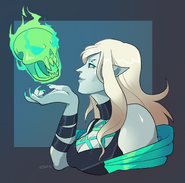 The Lichess by Jin 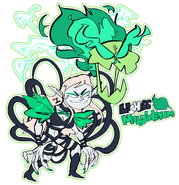 The Lichess by King Shada 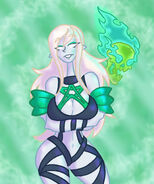 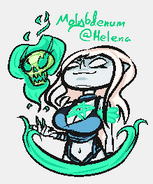