Fantendo - Game Ideas & More
Register
Don't have an account?
Sign In
Advertisement
in: Free to use Characters, Characters, Original Characters,
and 10 more

Leire is a character who first appears in Tessellate. Leire is a renegade who does whatever she pleases whenever it phases her. She is unemployed, and finds no use for materialistic things in life. While her past is very mysterious and unknown to everyone around her, she somehow ended up in Pader City working for Tess until she found that life boring and left.

Leire has long silver hair, with a fringe that covers half of her face. She wears a grey dress which looks very worn down, with rips and tears all over it. She wears a darker grey bomber jacket over the top of the dress, and wears black trainers on her feet. She has sharp red eyes, and wears a thin black choker. She has a scar on her right hand and a mole under her right eye.

Leire is a pretty sinister girl who has no regard to anybody that she hurts or injures in her plans. She will kill as many people as it takes to get what she wants, and finds it hard to control herself in situations that require her to be calm and collected. She loves to blow things up, and has been described as a pyromaniac by others, but she ignores those comments and continues torching places regardless. However, Leire is stable at some points especially if in the company of those she works for or is affiliated with, due to not wanting to show off her crazy personality to them out of respect. She can be a very loyal person but in the end she will always do whatever benefits her the most, and is prepared to jump ship the moment something sounds out of her interest.

She believes in removing things from the world which she finds personally uninteresting and boring. This also correlates to when she finds a situation predictable or boring, where she will stir things up to make them more interesting or climatic.

Leire is pretty weak, but she knows how to control fire and use weapons involving fire. Her signature weapon is a blowtorch, which she uses mainly to set fire to places which disinterest her. She also carries around matches and lighters wherever she goes if she can't be bothered to luggage around her blowtorch, which serve almost the same purpose.

Leire appears in Tessellate as Tess' lookout. She doesn't have a large role in the game, aside from fighting against Tiffany and eventually helping her to find Tess, after she finds the whole situation boring. It is speculated that due to her nature of loving explosives and blowing things up, that she was responsible for the supposed "earthquake" which destroyed Tess' hideout.

Leire accompanied Tiffany, Tess and co. in the adventure. She accidentally caused an explosion within the Army Base, sending Tiffany into a coma. Upon wakening, Leire started to be a lot kinder to Tiffany and started to care for her a lot more, for unknown reasons.

Leire used to serve under Tess as a lookout, especially when she learned about Tiffany and her whereabouts.

Leire used to despise Tiffany, probably because she was filled with lies from Tess. However, upon meeting her, she started to like her and care for her. 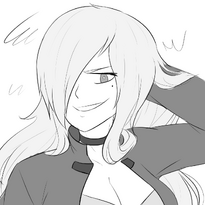