Fantendo - Game Ideas & More
Register
Don't have an account?
Sign In
Advertisement
in: Sysop Approved, Free to use Characters, Characters,
and 17 more

“Bishops are quite complex pieces. They move diagonally, and tend to be in extremely dangerous position to their enemies.”
— Leila Metals

Leila Metals is a character in the Ella-Metals series. She is briefly mentioned in both first game and the second, and then is playable in the third game, before getting her own series.

Leila was born 7 years earlier than Ella, she showed great abilities in the control of metal since a child. When their parents married, the family's surname changed to Metals, and she was already learning advanced skills in the bend of it. Not much years later, Ella was born, and Leila was always a great big sister to her. She cared for her, played with she, and loved to be with her. However, she also liked to pull pranks and laugh when she fell in them.

Leila was studious in school, and had a high IQ, slightly greater than Ella's. However, her introverted side showed up everytime, and she was more concentrated in reading and studying than in making friends. She later got into the university, and studied Engineering. However, after she got out of it, her family didn't have any news about her.

Ella received a letter, at the end of Ella-Metals 2 years later, from Leila, telling she was going to go to visit her. Thus, she arrives. Quite mentally unstable and she crashes her car.

Ella tries to find out why her sister is back, but she is too traumatised to say. They then have to work together and stop VineVille being taken over by a evil-genius mastermind.

Leila is very introverted, keeping a lot to herself. She was very quiet as a child, expect when with her sister. She is shown to be a prankster, but quite mature and caring for others. However, she can be extremely serious and cold at times, and is much more shy than her sister. The tragic events of her life have made of her an extremely mature person, using her powers wisely.

She is gentle and kind, but when angered, she can get extremely aggresive. She is rather wasteful and careless for others and only for her close trusted circle's good.

According to her LoveTreat profile, she likes long walks, long talks, being the centre of attention, being busy, company and money.

Leila is a playable character from her Car Crash mission.

Leila is a default character.

Leila originally appared from a Time Portal, she first crashes onto the stage with her car, and the runaway bride then and uses her Special Move from Ella-Metals 3. She was then promoted to a playable character and her entry on stage would be crashing her car and her Finisher as he EM3 Special Move.

Little is known about their brief relationship spell but they were shown to spend one Valentine's Day together. In role-plays Leila always mentions when Zak is doing something that John would do it better, clearly showing that she isn't over him. But she left him for his weapon use.

Leila is Zak's current girlfriend, the two get on like peas in a pod and make jokes with each other and commonly call each other pet names such as "babe".

Leila would always see David as a kid by taunting him with name calling and associating him with playgrounds and playing in the sea in role-plays, until he started a relationship with Bianca, where Leila apologises and immeadieatley respects him and sees him as a mature adult.

Little is known about Leila's husband apart from that she loved him dearly and was mentally hurt when ending his pain but happy for him. This trait still appears in awkward moments such as silences for Leila.

In this crossover, Leila Metals is stranded on a desert island with John Mogwai.

John Mogwai Vs Zak: Fight to the Death

In this fan fic John and Zak from Doodleland fame literally fight over Leila. It is a comedy-based story.

Leila has a minor role to start with, as the fight mainly focuses on Zak and John. However by Chapter 5, it's revealed to be delusions of the two, and Zak wakes up from the hospital bed and contuines waking up until he and John encounter Leila on a grassy field. Zak seemigly wants to contuine the fight, but it is revealed to be Hooly in disguse as a robot. Hooly captures Leila, and the two team up to defeat Hooly. The canon ending has Zak marrying Leila leading to the Chat Role-Plays.

Leila Metals in a Zero Suit (By Sorastitch). 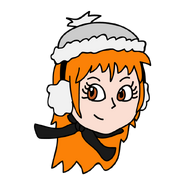 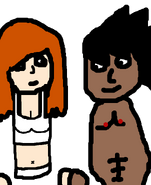 Leila with John in John Mogwai and Leila Metals