Lee Koroshi-Ya is a Water/Psychic (type)-type Tyrogue, and the main character in the Faitingu series. Lee uses many water bombs, water balls, water jets and other psychic powers.

Lee is a blue and pink Tyrogue who is never seen with his blue mask. Lee sometimes wears green wristbands and sunglasses.

Lee appears as one of the main characters of the Faitingu series. He appeared in Faitingu: Origins as one of the heroes who defeated the ancient evil Akuma Kodai. He also appeared in the sequel, Faitingu: Strengths, where he was trapped in a force field for a large portion of the game. He also got to meet his ancestor Hitto in Faitingu: Strengths and seems to have developed a small crush on his friend Julie Kasai.

Lee appears as a default character in the game Fantendo Kart: Helden, which marks the debut of him in a crossover game. Lee's signature item of Water Jet consists of him placing an orb of water on the back of his kart and blasting forward with a water jet behind him.

His stats are as follows: 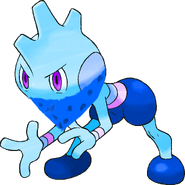 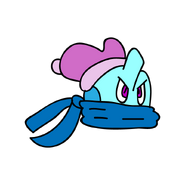 Retrieved from "https://fantendo.fandom.com/wiki/Lee_Koroshi-Ya?oldid=2509095"
Community content is available under CC-BY-SA unless otherwise noted.