Ledyba (Japanese: レディバ Rediba) is a dual-type Bug/Flying Pokémon. It evolves into Ledian starting at level 18.

Ledyba is similar to a red ladybug with five black spots on its back. Ledyba's carapace and back (when the wing covers are lifted) are yellow, and its eyes are large and round. Ledyba also has six black legs with hands that resemble boxing gloves and two black antennae. A female Ledyba has a shorter antennae than a male Ledyba does. It has a pair of clear wings underneath its wing covers.

Ledyba is a gregarious Pokémon, to such an extent that it will be timid, stricken with doubt, afraid or even unable to move if it is alone. Ledyba secretes an aromatic fluid from where its legs join its body, which it uses to communicate with other Ledyba. Ledyba conveys its feelings to other Ledyba by altering the fluid's scent. When the weather turns cold, many Ledyba gather together to cluster and keep each other warm. Ledyba have been shown to serve a role in pollinating the fruit-producing plants of the Pokémon world, and are usually instructed to do so by means of a special whistle. However, like most Pokémon, it will also able to respond to regular vocal commands. Ledyba builds its nest on leaves in the forest.

Ledyba is based on a ladybug. Its Shiny coloration seems to be based on Coccinella transversalis.

Ledyba and Rediba are derived from ladybug, ladybird, and possibly red. 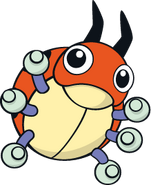 Generation VI
Add a photo to this gallery
Retrieved from "https://fantendo.fandom.com/wiki/Ledyba?oldid=2146759"
Community content is available under CC-BY-SA unless otherwise noted.