“I don't care which tricks you'll use, Mario, but you won't thwart my father's plans anyway, whatever you do!”
— Lavora, Super Mario Star Journey

Lavora is one of Bowser's Koopalings, and probably the eldest of them all, even older than Ludwig. She has interest in rock music, and is sometimes quite the prankster. For some reason, she's sometimes considered attractive amongst a few of the Koopas in the Koopa Troop. She neglects these fans and doesn't consider them to be important.

Lavora has a passion for rock and punk music. As such, she makes rock music as a hobby and even makes up her own songs. She cares very much about her hair, just like Larry and Iggy.

Lavora is also very loyal to her father Bowser. Sometimes, she also likes playing some pranks and tricks with some of her siblings. Surprisingly, she can act as a mentor to her younger siblings that have an interest in one of her hobbies (e.g. she respectfully teaches Dolly guitar lessons).

However, Lavora is sometimes too full of herself, thinking she can leave many things to herself.

Lavora is one of the tallest of all Koopalings, as she is also older. She has gold, rough hair and a red, spiky shell, with lavender-colored rings for the spikes. She has a red-colored head, red eyes and a lavender bow, wrapped on her tail.

Her eyebrow is surprisingly similar to Bowser Jr.'s eyebrows, and the horn on her head looks like one of Bowser's.

Just like her father, she can breath fire. She can also climb on walls and jump on the victim. She is also a great guitarist, and is able to make up her own songs on her electric guitar. She can also create False Notes when one of her guitars is enchanted by Kamek's magic.

In overall, she is fond of almost all of her siblings. Several of them like Lavora as a big sister as well.

Lavora's debut is in New Super Mario Bros. Omega, where she was in the airships of World 8. The heroes were surprised, as they suspected Bowser Jr. instead of this never-seen-before Koopaling girl.

Lavora appears as a boss in this game, appearing in the Mid-Boss course Lavora's Evil Theater, being the first boss holding a Super Key. She again makes Evil Notes, which this time must be sent back with Tuba Mario's Power.

Lavora appears as a guest in New Super Mario Bros. VR with a small role, the host of the World 9 (Rainbow world) selection at the enemy zoo.

She is an unlockable playable character in Mario Enemy Party. She'll be unlocked when all the other Koopalings in that game have been played at least once. 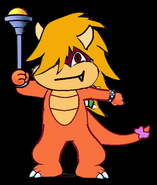 A drawing of Lavora 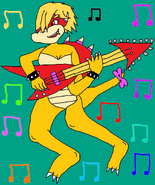