Laval is an Inferno Boo, and a character initially the Fantendo Fury series, but also has his own.

Laval is a basic Inferno Boo except he has a teal toungue, and is often called "Blue Mouth".

Laval makes his first appearence in Fantendo Fury 3 helping Moyan defeat Zork. He dissapears in the middle of the game, after getting lost in the jungle, and getting abducted, but returns for the final fight against Zork.

Fantendo Smash Bros. DS
Add a photo to this gallery 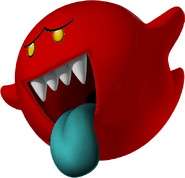 McBoo's Mansion 3: Episode 1
Add a photo to this gallery 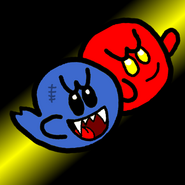 Laval and Scarr
Add a photo to this gallery
Retrieved from "https://fantendo.fandom.com/wiki/Laval?oldid=2031942"
Community content is available under CC-BY-SA unless otherwise noted.