Lava Bubbles, also known as Podoboos, are fireball creatures in the Super Mario series, that usually appear in castles as obstacles. Their main method of attacking is jumping out of the lava pools. They can be defeated with iceballs.

Rarely, in some games, they appear playable.

While they are often depicted as round spheres of fire with three short tails, Lava Bubbles also used to look like flames with eyes, resembling the head of a Fire Snake.

Lava Bubbles appear as items in Koopa Kart DS. When thrown, they act the same as Bob-ombs do in the Mario Kart series. They reappear in the rest of the Koopa Kart Series after the DS version with the same function.﻿

Lava Bubbles once again appear in Super Mario Galaxy Odyssey; in fact, this is their first appearance as a playable character, as additional players are able to control the enemies using Tricky. When controlled, the players can choose when to make them jump, and make them jump at a certain angle, trying to hit Mario. If a Lava Bubble lands on land instead of back into the lava, they will dissolve and be gone. Besides this, Lava Bubbles only jump straight up.

Lava Bubbles return in Super Mario Finale. As in past entries, they can jump straight up or diagonally. Additionally, they gain the ability to jump vertically up walls of lava. Mario also gains the ability to jump on top of and ride Lava Bubbles after using a Silver Star and a Fire Flower, allowing him to access new areas using Lava Bubbles. This can also be achieved in some rooms by freezing the Lava Bubble in place with an iceball from the Penguin Suit.

Podoboos appear in numerous castles throughout the world map in this massively multiplayer online action platformer published by Lunatic Entertainment, where they act as they normally do; however they will not pop up if the only players nearby are aligned with the castle's affiliation (example: if in a Dark Kingdom-aligned castle, they will leap out of the lava if a Mushroom Kingdom- or Beanbean-aligned player passes by, but if the only player(s) around are Dark Kingdom-aligned, they will remain passive). They can be destroyed via a Super Star, Gold Flower, Hammer Suit, Penguin Suit, or an Ice Flower power-up.

Podoboos appear in castles and lava-filled regions of the game, again produced by Lunatic Entertainment. Because the game is set in the Bob-Omb Kingdom, they are considered especially dangerous, and often can inadvertently set explosive charges set up throughout levels and cause them to detonate, which can either injure or kill Mario and Luigi outright from the blast or leave them without a platform to stand on, leading again to their demise. Bob-Ombs of all types appear to fear them.

Lava Bubbles appear as NPCs. In the Bowser’s Castle Court Lava Bubbles rain from the sky but disappear on impact to the court if it hits a player it will knock them down. 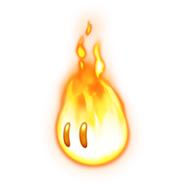 Acid Bubbles, a variant of Lava Bubbles that reside in acidic liquids.

Ice Bubbles, a variant of Lava Bubbles that reside in frozen water.

Volbono Bubbles, Lava Bubbles that are native to the Luncheon Kingdom.

Black Lava Bubble, a variant made from black paint 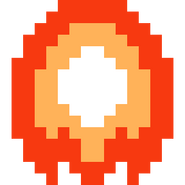 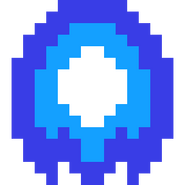 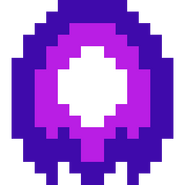 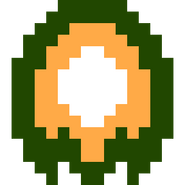