Laura Palmer is a woman from the RTAverse. A girl who was once involved in a rather horrible accident when she was 14, Laura was given superpowers as a result of inhaling radioactive ash which her body soaked up. Since the incident, Laura has struggled health-wise, with the incident heavily damaging her heart and leaving unhealable wounds.

Laura has got long red hair, a red jacket, a black skirt and brown boots. She also has black fingerless gloves. Her eyes are green. She is revealed to have two glass panes over her heart and stomach, presumably caused by the accident she had. She also has a large scar down her left side, where a kidney had to be removed.

Laura is the embodiment of extremely bad luck. Growing up around the world, she had a hard time. She was born in Australia, moved to the UK at age 2, went to Japan at 5 then eventually settled in the US at 7. After 6 years living in the US, Laura's parents sadly died in a fire, leaving her orphaned. The following year, Laura was included in some sort of disaster that gave her PSI powers. She was in a coma for 2 days and was close to death, but Brendan, her adoptive brother, saved her. Angered, Brendan sued the hospital taking care of her, saying they weren't even trying and leaving her to die, and won the case, giving them a lot of wealth.

She has used these powers since, and it appeared to take a toll on her confidence. She managed to find a friend in Krystal, a girl who Laura met after coming out of her coma, but more or less is afraid all the time. Laura first discovered her powers near the hospital she was in, filling the car park with plants, vines and so on. After turning 17, she started getting horrible flashbacks and visions, for a reason she never discovered. Despite everything in her distressing life, Laura manages to keep her cool at all times. Her life on the outside is extremely down to earth, but her life is a nightmare inside, with a few damaged organs from the accident that very nearly ended her life.

Laura is extremely timid, to the point where anything can scare her. will tend to beat herself up over things that weren't even her fault. She normally whimpers away from going out, but will try and be brave sometimes. When scared, Laura will tend to use her powers more, which leads to pain in her intestine. After the events of Saving Laura, she becomes a lot stronger, braver, powerful and so on, with her being free from what stopped her in the past. The only problems following it are her schizophrenia and weak heart.

Laura, as drawn by RTA

Laura as an alt for Krystal in Fantendo Sports Resort 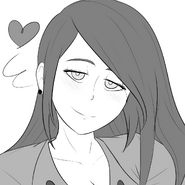 Laura, as drawn by Shadow Inferno (t∣b∣c).
Add a photo to this gallery

Retrieved from "https://fantendo.fandom.com/wiki/Laura_Palmer?oldid=2476775"
Community content is available under CC-BY-SA unless otherwise noted.