Latti, alongside her Mephoru ally and adoptive brother Aegis, is a mascot and prominent character of the racing game Featherweight. She is one of the youngest racers in the game, as well as the main character in the game's story mode.

Latti is the typical hero character - upbeat, optimistic, and always willing to help others. However, her devotion to others is shadowed constantly by an even stronger devotion to Aegis, whom she will put before anything and everything else - a flaw that always manages to come up time and time again. She is also more fiercely competitive than other heroes, and is always seeking for new and interesting ways to prove her worth in races and other various pastimes. Once she finds a new outlet for her skills, she tends to jump into it without first looking to see how well things will go for her in the long run. She tends to geek out a bit on the subject of the Feather Cup Grand Prix, and can talk the ear off of anyone who will dare to listen to the latest aerodynamics of Aegis' latest armor design or her thoughts on the strategies used by fellow racers.

Latti is most skilled on the saddle of a Mephoru. She is a capable racer, and can outmatching even the most experienced Mephoru riders when she's with Aegis. She is significantly less skilled at combat, having only used the Phoenix Lance a handful of times prior to entering the Grand Prix. When she isn't riding a Mephoru, her fighting style is nonexistent, as she is prone to tripping over her own feet and underestimating how much weight her lance has. She's slightly better at melee combat when riding, but her preferred strategy will always be to keep foes at bay with haphazard stabs and sweeping attacks in order to give Aegis more space to move around in. The only true advantage that using the Phoenix Lance offers over her other combat options is that it's capable of wounding deities, but as deities are a rarity in Auster, this feature rarely gets any use.

Like all other humans in Auster, she has a natural talent for magic which can be enhanced by combining her mana pool with a Mephoru's. Most of her magic is focused around either summoning offensive flames and hurling them at foes, or quickening Aegis' movement speed. Her signature spell Trailblazer combines these two categories together, allowing her to leave a trail of flame in Aegis' footsteps to create barricades that limit enemy movement.

The two get along like brother and sister, which can most likely be attributed to the fact that they technically are, as Latti was adopted into Aegis' nest at a young age. The two share a trust and a love for each other that can only stem from growing up in the same household. They tend to bicker over little things, but it is usually just lighthearted squabbling. However, as the older of the two, Latti tends to be a bit overprotective of her "little brother," which usually gets them into more trouble than it gets them out of.

Placeholder art of Latti's original design. Made with the Gaia Online Avatar Maker.

Placeholder art of Latti's current design. Made with the Gaia Online Avatar Maker. 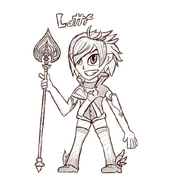 Retrieved from "https://fantendo.fandom.com/wiki/Latti?oldid=2844579"
Community content is available under CC-BY-SA unless otherwise noted.