Signups can be found here

Lapis Legends is a Expansive Umbrella Game. It has over 50 Playable Fighters. It will be available for Pre-Order on 6/12/19 for the Nintendo Switch mini.

There are over 50 playable fighters in the game, each with their own special ability. Some fighters can only be unlocked when doing specific requirements such as winning a curtain amount of Batles against someone or Getting to a certain point in the Story Mode.

Lapis Legends: Nightborn Fighters is the Story Mode for Lapis Legends. It takes place in the NightRift Relm where A mysterious villain has taken Fighters from near and far and out them into one place.

Lapis Legends:Multiverse Mashup is the Classic Mode to Lapis Legends. Unlike Smash. It has more than one boss that you can fight. In this mode you can use Fighters such as Mario or Luigi instead of just using Unten.

You can see there info Here

Pokémon are similar to Souls. They have different abilities than Souls as well

Godal Ball
Add a photo to this gallery

Similar to Build-A-Nyan from Yo-Kai Watch 3, this lets users fully customize a Beorn. They are also allowed to change its Skills as well.

After reaching Chapter 2 in the Story Mode. Players are allowed to cook things to be used in battle later.

Ancient Tomes are very powerful items granting users access to new abilities such as Unten’s Untenapdia which grants him the ability to change his costumes. There are three types of Tomes. Ability;Teaches Users a new Move or Skill, Miscellaneous:Unlocks Something Fun, And Location:This unlocks new areas for players to explore in.

There are 73 Different Tomes that make a debut in this game. So far 7/73 have been revealed. 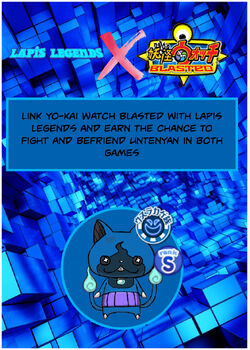 If you connect Yo-Kai Watch Blasted With Lapis Legends you will be able to unlock a new chapter to “NightBorn Fighters” called “Untenyan’s Quest.

Retrieved from "https://fantendo.fandom.com/wiki/Lapis_Legends?oldid=2953728"
Community content is available under CC-BY-SA unless otherwise noted.