Fantendo - Game Ideas & More
Register
Don't have an account?
Sign In
Advertisement
in: Free to use Characters, OwtheEdgehog, Characters,
and 11 more

Lance Doo (also known as Lance, real name is Larence "Lance" Doore) is a Waddle Doo who wields a lance who is one of Bandana Dee's friends and is one of the lackeys of King Dedede, making his first debut in Boss Battles as a playable character, though this not his first canonical appearance, his first canonical appearance was in Kirby Twinkle Terror. He was a former janitor, before becoming a guardian along with his best friend once he got a promotion one day.

Lance Doo is a bright pink/red Waddle Doo, meaning is a round creature with one eye like a cyclops, a magneta iris, dark magenta feet and three strands of hair. He also carries a grey jousting lance with him, in which he uses for long-ranged melee combat, and for conjuring electricity.

As seen in Kirby: Nova Zoo, Lance Doo appears with an upgraded lance during his boss fight. His EX version also shows him with a blue color scheme, and his lance has flames attached to it.

He originally had a small sword with a strapped sheathe for it. In Kirby Twinkle Terror's "Kirby Quest" sub-game, it seems that he still has this sword after switching it with a lance he currently uses, as some of his "Good!" attacks involve him using this sword.

Lance Doo is a harmless and friendly blob, despite his feisty nature, to his other comrades in King Dedede's army, and to other people who are not against the king's plans or are friends with him as well, like Kirby (sometimes). Though all friendships with others pale in comparison to his friendship with Bandana Dee. He greatly cares for him, acting like his own best friend and sparring partner. Lance also heavily despises any eye jokes/puns (or even Waddle Doo puns), and will poke anyone who says these puns with his lance.

Lance Doo, like Bandana Dee with his spear, uses his lance to perform long-ranged melee attacks, and conjure electricity and fire it from his eye like a normal Waddle Doo. This, however, as the cost of blinding him, for some odd reason. So, he instead conjures electricity from his lance, similar to Kirby's beam rod once he gains the Beam Copy Ability. As seen in Kirby Twinkle Terror and Fantendo Smash Bros. Nil, he is also fast and can wall kick as well.

In Kirby: Nova Zoo, Lance Doo uses an upgraded lance, which allows him to attack with even greater reach than before.

Back when he has his own sword, he usually used it as his own primary weapon, using it to slash and stab his enemies. He also used a mop during his janitor days as a weapon.

Lance Doo makes his first appearance as a playable character in Boss Battles, though not canonically. He plays similarly to Bandana Dee, but is slightly slower and more powerful. Lance Doo's attacks using his lance are very punishable if missed, so he is a risk-versus-reward character.

Lance Doo was confirmed to be a playable character in Kirby Twinkle Terror. In that game, he is one of the few characters another player can select, and uses his lance to perform a combination of Beam's and Spear's moveset in his arsenal. Lance Doo is much more faster than the playable cast, and does multiple jumps rather than floating.

In the game's plot, along with everyone else on Mt. Dedede, he was kicked off that area when the Shadowstar Legion took over, and was found by Kirby in Stage 2 of Wishy Waters. It is revealed Lance Doo was stranded here after being exiled from Mt. Dedede by the sinister organization. He joins Kirby on his quest to rid of the Shadowstalk Legion before they take over Planet Popstar, and becomes a playable character that the player can switch to inside Bris's space ship.

Lance Doo appears as a boss in Kirby: Nova Zoo, appearing in the Cookie Chaos route's down path. He has a new, improved lance in this game, using it to attack at a wider range as well as using it in conjunction with his Beam Whip, using it to briefly power up his blade. He summons a Super Blade Knight at the end of his fight, which ends up being the thing that defeats him as Kirby uses the Ultra Sword ability against him.

He can be fought again in the True Arena and other modes as Lance Doo EX, who has a blue coloration and a new lance that has flames attached to it, allowing him to fight quicker and with the flame aspect to him. At the end of his fight this time, he attempts to attack Kirby with a wall of flame instead of a Super Blade Knight, and if Kirby can dodge the flames, Lance Doo will be left open to attacks. When his fight ends, he puts the lance into the ground and bows to Kirby.

Lance Doo makes his debut in a Super Smash Bros. game in Super Smash Bros. Discord as an Assist Trophy. He acts similar to Bandana Dee, though he is much slower, deals more damage, can charge up his lance to make his attacks stronger and even use it as a pogo-stick, and has higher health.

Lance Doo as Ninja Waddle Dee Makes his Debut as a Boss which Joey/Akashu Had to Defeat. 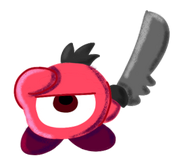 Lance Doo with Exo's colors. Credit goes to Exotoro (t∣b∣c) for the art 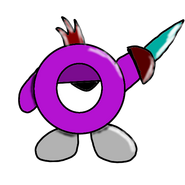 MeGa eXal (t∣b∣c)'s take on Lance Doo, mixing both Ow's and Exo's colors into this 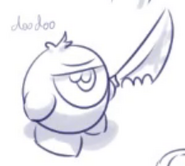 AssassinKnight-47's doodle take on Lance Doo, from an art stream 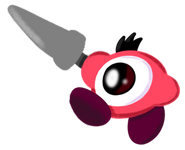 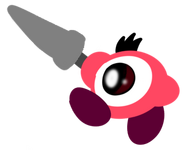 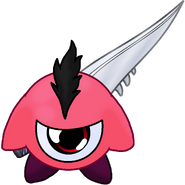 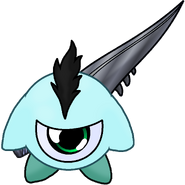 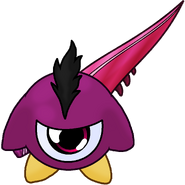 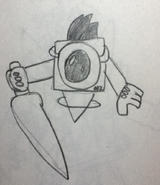