Lana (Japanese: ラナ Rana), the White Sorceress (Japanese: 白の魔女 Shiro no majo), is one of the main protagonists of Hyrule Warriors. Lana is an energetic sorceress with a deep knowledge of both magic and monsters. Throughout the events of Hyrule Warriors, Lana is the wielder of the Triforce of Power, which is often held by Ganon.

Lana was originally apart of Cia, who was tasked with overseeing Hyrule and maintaining the balance of the Triforce. As Cia observed the events that transpired over time, she began to develop a love for the chosen hero that had saved the land from evil countless times, and in turn a deep jealousy for the land's princess. As her love for Link grew, she became susceptible to the dark influence of Ganon who pushed the light out of her heart and corrupted her soul. The light pushed from Cia's soul became Lana.

After Cia had been corrupted by Ganon and began to rage war on Hyrule, Lana travelled to Hyrule and worked to form a small resistance headed out of Faron Woods to take her other half down. Though her army was small at first, Princess Zelda's bodyguard Impa, the chosen hero Link, and the mysterious Sheik eventually came across her resistance force while out searching for Princess Zelda, who had been kidnapped by Cia's goons. Link, Impa, and Sheik assisted Lana by clearing the enemies out of the woods, and in turn Lana joined the Hyrulean Army. She joined with them and fought alongside the group as they worked to triangulate Cia's location and stop her army from rampaging Hyrule.

Once Cia opened the Gate of Time and brought locations from the past into the present, the Hyrulean heroes were forced to split up. Cia travelled to the Era of Twilight, where she encountered a young girl named Agitha, who assisted her in traversing the small separated Twilight Realms that had been opened up by the Twilight Princess and Cia. As the three chased after Cia and Zant, whom the former had recruited for her cause, Midna and Lana eventually came to locate the Gate of Time and close it, but not without injuring Cia enough to reveal her face and force Lana to tell Midna, and later their other allies, about her relationship with the Dark Sorceress.

As the battle between Cia and the Hyrulean Army raged on, Lana continued to fight alongside the heroes of Hyrule, and eventually she aided Link and Zelda in retrieving the Blade of Evil's Bane to seal away Ganon's influence on Cia, inadvertently resurrecting Ganon's Gerudo form, Ganondorf. She, alongside the other warriors of Hyrule's history, finally fought the weakened Cia and Ganondorf at the Temple of Souls, and pushed Ganondorf back to Hyrule Castle, which he has transformed into his fortress. Utilizing all of his power, Ganondorf transforms into the giant boar-like Ganon and fights the Hyrulean warriors head-on, eventually leading to his defeat and allowing him to be re-sealed by the Master Sword. After his defeat, Lana leaves Hyrule behind to return to her position of Guardian of Time.

Lana, having been born explicitly from the light from Cia's heart, is a more youthful and innocent counterpart to the more-serious and mature Dark Sorceress. Being the 'virtuous' side of Cia's heart, Lana is a very positive individual. While her allies aim to defeat Cia and push back her army of monsters, Lana instead aims to save her from Ganon's corruption.

Within the Bola Parasola collection of games, Lana plays a prominent role. Specifically, Lana serves as the de facto main protagonist of the ⌭Saga of hack-and-slash games, where she works alongside Cia, Palutena, and a plethora of other heroes to defeat The Shadowman.

Lana is a playable character in Hyrule Heroes. She fights with her Tome and her Deku Spear, and can also use crippling magic attacks. She is a speedy character with good defense.

Traumatized by the disappearance of her chief and boyfriend Meta and some of her friends since the Kirthar's Snap Finger, she does not intend to stop there and even intends to go back to Ancient Weapons under the influence of Kirthar. With some Star Team members still alive, they will go to the collection of ancient weapons in the past with Lana's powers reliving some moments of Star Team games. During the adventure, She will try to awaken her powers that lie dormant in her in order to become the Goddess of Time as was her father.

Lana is one of the default roster characters. 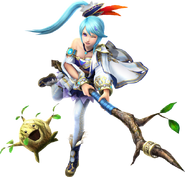 Lana's alternate costume based upon the design of Skull Kid

One of Lana's alternate costumes from Hyrule Warriors Legends

Retrieved from "https://fantendo.fandom.com/wiki/Lana?oldid=3203969"
Community content is available under CC-BY-SA unless otherwise noted.