Lammy Koopa is a Koopaling who debuted in Mario The Shocking Electrifying Adventure.

It is revealed at the end of the game that he is a bunch of pixels out of a computer game, after one of Ludwig's inventions were tampered with by Larry and Lemmy.

In his debut he is the final boss, as it is a game of electric land, full of different bosses, he then appears in Bowser Is Missing, helping the Koopalings find Bowser. Afterwards appearing in Lammy And Matilda Travels in time, as a main character along with Matilda. He then appears in Koopa Backstory, as a playable Koopa. In Koopa's Revenge he is again playable as a character. He appears in Super Mario To The Rescue as the third to last boss. Finally he appears in Computers Vs. Books as one of the two playable characters (the other being Matilda).

"Hope you enjoyed your time here Mario, because you're going to die!"

"You are finally here, now bow down to my electric power, because you're going back to the beginning!"

"Lets travel in time Matilda and change the past to make everything better now."

"Where is Bowser? Nooo he's gone!"

He's friends with pixels, computers and the Koopalings, but mostly hangs around with Matilda.

His personality consist of a mixture between Lemmy's and Larry's, while he's playful, he also has a serious stroke and he seems to be fond of tennis like Larry. 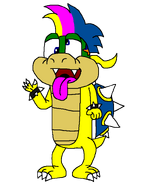 First redesign of Lammy by Aiva
Community content is available under CC-BY-SA unless otherwise noted.
Advertisement