Lamia, known as the Seamstress in the first game, is one of the main antagonists in Dark Woods, although never having appeared as a boss in any of the games.

Lamia was born as an Eve in the realm Eden, although not being a direct descendant of her. She was best friends with Pan, the prince of Eden, and Nostradamus. She was still a young and innocent girl who used to tag along with the boys for adventure. But the father of Pan, the King of Eden, developed some kind of crush on her and often would flirt with her and even sexually harassed her. When the Queen of Eden found out about this she became furious. Instead of punishing her own husband, she felt like Lamia was at fault for having so much appeal at that young age. As punishment the queen ripped out Lamia's uterus so she could never bear children which was, according to her, a fitting punishment who used herself as sex object.

Lamia fell into a depression at the thought she would never be able to bear any children. Nostra approached her and said that she should give him her eyes which would awaken both of their powers, with the intention of killing the rulers of Eden. Lamia did as he said which led to the death of the king and queen, and the destruction of Eden. While Pan and Nostra were causing a rampage in Eden, slowly turning it into the Dark Woods that we know it as today, Lamia decided to build a new home for the three of them.

Nostradamus said he would try to obtain powers so he could return Lamia's uterus so she could live as a normal Eden being. She thanked him for it and was told that she did need to collect vessels of Lilith that were still roaming in the human dimension. Pan said he would lure them to the Dark Woods so that Lamia could turn them into vessels. When Lily and Rai entered the Dark Woods they were led to the circus tent where they were ambushed by Pan and Lamia. Lamia decided to take care of Rai while Pan would take care of Lily. She planned to make Rai insane by feeding hum human flesh and turned him into the Blue Beast. She equipped him with a straitjacket that she protected with Lunar energy so he couldn't break free. After that it was just waiting for the last two.

When Hein entered the Dark Woods, Lamia introduced herself as an ally, making him believe that she could help him find the amulet and lead him out of the Dark Woods. However, as according to plan, Hein slowly turned into a demon while Lamia kept pushing him further into the Dark Woods. She managed to drive Hein to a complete demonic form where even he had trouble keeping his senses there. After they fought the Siren, who was revealed to be Ligeia later on, Lamia headed into the water to collect her. She discovered that Ligeia was the last living Lilith in the Dark Woods and it would easily fill up the last spot. She turned her human and modified her again to resemble a mermaid. However after saving his sister and learning more about Lamia and Pan he came to his senses which ruined their plans.

Lamia had collected all the remains of the freaks after their defeat at Hein's hands and repaired them again. But when Hein ruined their plans she had to move all the bodies to a new location where they could put the Starchildren inside of them as vessels. Lamia grabbed everyone except for Lily, Rai and Hein who she was unable to kidnap. She fled along with Nostradamus to a threshold where they executed their plan and expanded the Dark Woods for their next part of the plan, leaving Pan to his demise.

Again, Lamia acts as a supportive role in the third game. She mostly keeps herself hidden in the threshold where Nostradamus is collecting the spirits of the Starchildren. She again guides Hein, Lily and Rai to the correct locations of where they need to be. Unbeknownst to them they are executing the plan of Lamia so Nostradamus can collect all the spirits. All she does is open new parts of the woods. There are a few cutscenes where she talks to Nostra about the progress of Hein and her concerns.

When Nostra collected all the spirits of the Starchildren he gained the new powers of Nova. With that he restored the uterus of Lamia so she could have children again. They wasted no time and had sex with each other, with Nostra impregnating Lamia. The seamstress was kept in the back of the threshold where she could rest. Hein, Lily and Rai entered the threshold where they battled and killed Plague Master. They continued through the threshold where they encountered Lamia. Rai immediately wanted to kill her for what she had done to him, but when Lamia said she was with child and explained that all this was planned to make her pregnant made Lily stop Rai. Hein said they would leave her alone if she would get them back home. Lamia opened a portal to the human world that spawned at the circus tent and said she wanted to raise her child in peace. The three left, leaving her behind.

In the secret ending Lamia was shown giving birth to a baby girl with magenta eyes and hair, she didn't cry. Rosie and Posie, in humanoid form helped her deliver the baby. Shortly after she saw her baby she passed out.

Lamia only appears in flashbacks in the third game. It was revealed that she survived the birth of Ashley and afterwards tried to take care of her like a good mother but because Ashley was 1/5 disease it didn't work out. When she gave Ashley the breast the diseases spreaded throughout her body, but despite that she didn't give up on it and tried to raise her properly. Unfortunately she eventually died to the disease leading to Ashley becoming a villain who wanted to meet her father who she deemed stronger than her mother.

She appears in a vision to Ashley near the end of the game.

Lamia is mentioned several times in the game by the main characters.

In the past Lamia was an innocent girl who loved going on adventure with her friends. There wasn't anything wrong with her and she was just the stereotype girl who cared a bit about her looks, but cared more about her friends. After the event in which her uterus got ripped out her whole personality made a complete change. She was depressed for a long time and wouldn't say anything and just cried. Luckily that phase passed and her new self was born.

Lamia cares about her looks and always makes sure that she looks at least presentable. She loves to taunt her opponents, mock them and make them fall into despair. It gives her satisfaction and hope that their plan will come true. Her whole personality is driven on the fact that she want their plan to succeed. She can be very misleading and will often present herself as a nice person, despite not being one. If Lamia knows this herself is unknown, which could mean she is a very good actor of that she just doesn't notice that she is being 'happy' all the time. It was already shown that she cares a lot about her friends Pan and Nostra. She grieved a lot about Pan's passing, although not showing it to Hein and the others. But after Nostra got killed she only tried to save her own life. However this might could've been duo her being with child.

Overall Lamia only cares about her friends and doesn't care a bit about others. She is selfish and likes to see the despair of others.

Because Lamia never appeared as a boss in the game not a lot of her abilities and powers are known. The only things shown is that she can use Lunar energy and is a very good seamstress. She remade entire human bodies and made them function with a touch of her Lunar energy. She used her Lunar energy a few times, most active to capture Rai in his straitjacket. She is the only one capable of immediate teleporting. She can open gates and lift objects from distances as well. All these abilities most likely originate from her Lunar powers. 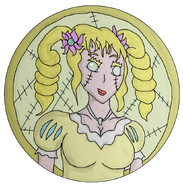 Lamia as she appears in Dark Woods II: New Woods

Lamia in Dark Woods: Survival
Add a photo to this gallery
Retrieved from "https://fantendo.fandom.com/wiki/Lamia?oldid=2362479"
Community content is available under CC-BY-SA unless otherwise noted.