Lakitus are semi-common enemies in the Mario series. They ride in a special cloud, and although they are related to Koopas, they don't resemble them very much. While Lakitus are enemies in the mainstream Mario games, they are mostly allies or referees in sports games. When enemies, they follow and throw Spiny Eggs at Mario. Their cloud can be used as an item if Mario manages to stomp them. Lakitus are featured in a majority of the main series of Super Mario video games.

While most Lakitus follow the general rule of flying high above their target and throwing Spiny Eggs, they have been shown to take on many different strategies. Some Lakitus throw green Eggs which never hatch and instead roll across the ground. Other Lakitus try to reel in unsuspecting bait by affixing a 1-Up Mushroom to a fishing pole- these are known as Fishin' Lakitus, and they have a spectral counterpart in the Fishin' Boo. There's also a pipe-dwelling subset of Lakitus which are creatively named Lakitu In a Pipe. The strongest and rarest of all is the Thunder Lakitu, who resembles the Japanese god of thunder.

They appear in Super Mario MHL as playable characters, as well as spectators.

Lakitu appears as an unlockable character in P-Floatie Racers. To unlock him, the player must beat the Flower Cup in 150cc. He's a Feather weighter character, his P-Floatie is white-coloured and has his cloud for the decal.

In Mario & Luigi: Rivals Quest, Lakitus appear as common enemies in the locations Fluffy Skies and Starshine Bowl Beach. In the overworld they will swoop down and/or will throw Spinies in hopes of striking first in a battle. Their in-battle attacks are the Spiny Throw and the Cloudy Dash.

Lakitu is very fast when he's on his cloud, and if someone get in the way, he will hit him with a Spiny.

Lakitu appears as a protagonist and the Lakitus are not enemies in Super Mario Wii Adventure.

Lakitus appear in Super Mario Spikers as playable characters, appearing as Defensive-type sidekicks. Their cloud changes color to match their team, with their team logo imprinted on the side. They also have matching-colored headbands and shells. Their theme is a fast-paced remix of the athletic theme in Super Mario Bros. 3.

Lakitu appears as a referee at the Athens 2004 and Torino (Turin) 2006 Olympic Games.

Lakitu appears inSuper Mario: Emoji Battle as a playable emoji. Lakitu's Special is: Lakitu pulls two random power-ups from out of his cloud and throws them on the board. Lakitu's Attack Special is: Lakitu creates Spiny Egg hazards on the board. Luigi is a common emoji that can be unlocked by opening a ? Block, opening an ! Block, or battling Lakitu in Character Battles. Lakitu's favorite item is the Lakitu's Cloud. Lakitu's emoji can be fought in the following Character Battles: Lakitu. Lakitu's Badge can be unlocked by unlocking Lakitu, beating an opponent using Lakitu while a kart item is equipped, and throwing Spiny Eggs on Yoshi's Board. 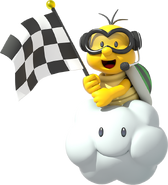 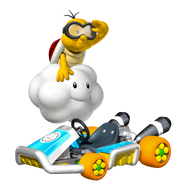 Lakitu and his Standard Kart in Mario Kart (Series) 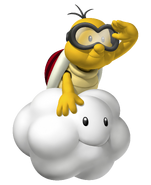 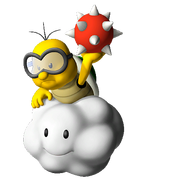 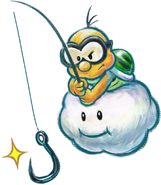 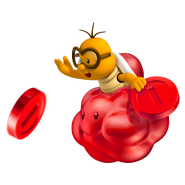 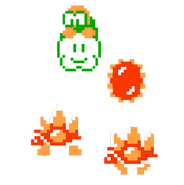 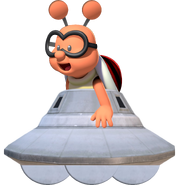 A Lakitu in Super Mario Spikers 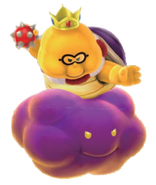 Lakilester, one of Mario's old partners