Lakithunder is a Lakitu character who rides a thundercloud. He first appeared in New Super Mario Bros. as the boss of the secret sky-themed World 7, and has since appeared in many Mario fangames.

Lakithunder attacks by shooting lightning downwards from his Cloud, throwing Spiny Eggs fast enough for them to bounce off of the ground, and swooping down at Mario or Luigi, which leaves him open to attack. Lakithunder is defeated in three stomps.

Although this is not officially confirmed, Lakithunder may have caused the thunderstorm at the beginning of New Super Mario Bros.. The storm appeared localized directly above Peach's Castle, struck with lightning in a similar manner to Lakithunder's attacks, and was used as a distraction so that Bowser Jr. could kidnap Princess Peach. Furthermore, Lakithunder is the penultimate world boss, only followed by the main antagonists, Bowser Jr. and (Dry) Bowser.

Lakithunder is a frowning Lakitu with yellow-rimmed sunglasses, similar to the goggles regular Lakitus wear. Instead of three strands of hair, Lakithunder has a tiny Lightning Bolt on his forehead, and he also wears a black scarf. He also wears black and red wristbands, and a shell with a pitch-black carapace.

His Lakitu's Cloud is dark gray and has yellow, angry-looking eyes, but still retains the grin. Due to the Nintendo DS's low screen resolution, most of the smaller details were barely noticeable, so most of the common depictions of Lakithunder retain the black-rimmed sunglasses, black shell, bald head, and gray's Lakitu Cloud, but omit the Lightning Bolt, wristbands, and scarf.

Interestingly, games in the New Super Koopa Bros. continuity depict Lakithunder with a large Lightning Bolt on his head, akin to the small one on the Lakithunder from the actual game. He is smiling, like a normal Lakitu. His scarf and wristbands are removed. He also has three strands of hair to go with his Lightning Bolt.

Lakithunder appears as a boss in New Super Mario Bros. D.I.Y.. Lakithunder was a normal Lakitu who experimented on himself to goin Bowsers army and avenge his father, Giga Lakitu.

Lakithunder appears as a boss at the tower in the "Sky Dream" stage.

Lakithunder appears as a boss in Goomsday Wii under the Super Scepter's control. He takes command of all Lakitus, and builds his own Super Castle: Cloud Castle. After Waluigi and his pals destroyed Piranha Palace, Lakithunder sent his troops to kidnap them before they fell to the rainforest floor. When he is fought, Waluigi must use his Cheating to reverse the lightning flow and destroy Lakithunder's Cloud. Bowser Jr.'s Paint can be used to stop the Dark Lakitu from rising again. From there, he can be pummelled mercilessly. The next boss is Major Burrows.

Lakithunder returns in this game.

Lakithunder reappers in this game as the boss of Stormcloud Tower, in World 6: Sunny Cloudway. His battle involves shooting lightning down at Mario, throwing Spiny Eggs to become Spinies, or a Thunder Piranha Egg to become a Venus Thunder Trap. 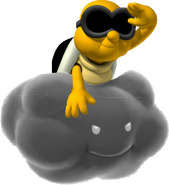 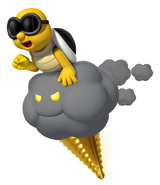 The drill version of a Lakithunder. 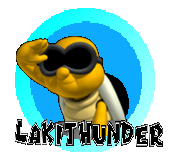