Start a Wiki
“But what a nice surprise to see you! Feel free to be overwhelmed by my beauty.”
— Lady Bow, in Paper Mario


Lady Bow is a Boo that appears in Paper Mario. She is the leader of a gang of Boos that reside in Boo's Mansion in the Forever Forest. She is aided by her butler, Bootler. The Boos find the Star Spirit Skolar trying to escape Tubba Blubba, and makes a deal with Mario and friends that she will give him to them if they help her and the Boos by defeating Tubba Blubba, who has been eating them. She is very strong-willed and a tad snooty, but also kind and willing to aid those in need. Her abilities are similar to Vivian in Paper Mario: The Thousand-Year Door and Slim in Super Paper Mario.

Mario and company arrive to the Forever Forest to find the Star Spirit, Skolar. Unbeknownst to them, Skolar managed to escape from Tubba Blubba, who was assigned to guard him, and got lost in the forest. He was found by the Boos residing in Boo's Mansion, and held captive in a cage. When Mario meets Lady Bow, she enlists Mario to save the Boos from Tubba Blubba by defeating him, and promises the Star Spirit in return. She temporarily joins Mario's party, which Bootler disagrees with at first, but Lady Bow says her mind is made. After Tubba Blubba is defeated, she permanently joins Mario on his adventure.

In the field, Lady Bow can turn Mario invisible. This can allow him to avoid enemy detection, as well as avoid being damaged by certain obstacles. However, Mario is unable to move while invisible. In battle, her primary attack is Smack, where she slaps an enemy multiple times to damage them. She can also use Outta Sight, which costs 2 FP, to make Mario invisible. This is best used to avoid enemies with high-damaging attacks, such as Hyper Goombas, Hyper Paragoombas, and Hyper Clefts when they use Charge. When upgraded to Super Rank, she can use Spook, which costs 3 FP, to potentially scare enemies away from battle. When upgraded to Ultra Rank, she can use Fan Smack, which costs 5 FP, to use her fan to smack enemies, dealing more damage than Smack.

Lady Bow, along with Bootler, make a cameo appearance in Paper Mario: The Thousand-Year Door, where they appear in Poshley Heights after the game is beaten. Talking to Lady Bow reveals that she and Bootler are on vacation, and is quite glad to see Mario again. Humorously, Goombella demands Mario to tell her his relationship with Bow, but says she's only kidding, and has always wanted to say that to someone.

Lady Bow resembles a light-green Boo. Her eyes are different than typical Boos, lacking a unibrow and having darker eyelids. She also lacks teeth in her mouth, which is notably smaller compared to the average Boo. She wears two red-and-yellow ribbons on either side of her head, and is usually carrying a pink fan.

Lady Bow is very strong-willed, as she is willing to help save her gang of Boos from Tubba Blubba as well as travel with Mario to help him on his adventure. She is also quite snooty and sarcastic, and thinks highly of herself due to her princess-like status.

In this story, Lady Bow's first appearance was the second chapter, where she was one of several guests that were attending Mario and Luigi's surprise birthday party at Princess Peach's castle. When Bowser and the Koopa Troop showed up to seize control of the princess's castle, Bow took part in the battle, but due to Bowser being granted invincibility from the power of the Chaos Star, neither she or any of the others were able to inflict any damage on the Koopa King.

During the events of the fifth chapter, Lady Bow and the rest of the heroes learned that the Chaos Star was not only an object that was meant to grant infinite power to the user, but has also opened a void in the sky that would eventually ravage the entire universe. When the heroes split up into groups to look for the eight Purity Stars (which were designed in order to combat the Chaos Star's destructive power), Bow tagged along with Luigi, Vivian, Doopliss, Mimi, and Nastasia to search for the Purity Star that resided at Ludwig von Koopa's horror-themed castle.

Lady Bow appears in Paper Mario: Stolen Worlds. In this game, Wario transformed her into a Partner Card, alongside the other partners Mario recruited on his adventures. After being found, she can be used in battle.

Lady Bow's attacks from Paper Mario can all be used in Stolen Worlds, though her Fan Smack now costs 6 FP, but has a chance of inflicting Dizziness. She also has an Omega Rank move called Boo Bodyguards, which costs 33% of the total FP, where she calls a gang of Boos to attack all enemies, dealing heavy damage and even hitting Dodgy or Invisible enemies. Her Card Perk is that Boos and related enemies, including Boohemoths, will run away after being attacked once by Lady Bow.

Lady Bow appears in Super Mario Spikers as a playable character, appearing as a Skill-type captain. Instead of wearing two bows, she wears a pink beanie on her head, which also has a red-and-yellow bow on top of it. She also wields two pink fans, and uses them to attack and spike the ball. Her emblem is her mouth with two bows above it, and her theme is Gwo Ka.

Lady Bow appears in Super Smash Bros. Charged as a Partner Card summon. When summoned, she will use her Outta Sight ability to temporarily turn her summoner invisible, before disappearing. 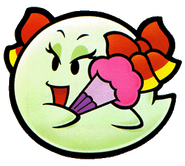 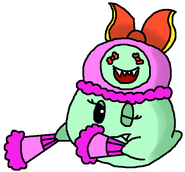 Lady Bow in Super Mario Spikers
Add a photo to this gallery
Retrieved from "https://fantendo.fandom.com/wiki/Lady_Bow?oldid=3208728"
Community content is available under CC-BY-SA unless otherwise noted.