Labrys is a character from Persona franchise, debuting on Persona 4 Arena as a major character, she is Metis and Aigis' sister.

Due to her larger Plume of Dusk, Labrys' personality developed quicker than the other mechanical maidens. She is a caring individual who doesn't want to hurt, let alone kill, anyone she cares about. When she thought she was the human student council president, she was serious, strict, and responsible.

The growth of her ego can be observed within Labrys' thoughts. Moments after her first activation, Labrys' thoughts are extremely simple to understand and consist of the usual technical statements. The more Plumes of Dusk she absorbs, Labrys becomes increasingly eloquent and starts to develop emotions, eventually culminating in her friendship with Unit #024. Even more interestingly, this does not apply to her speech that much since she speaks with an accent directly after her activation.

Labrys returns as part of the S1 DLC characters.

Her Shadow-Self is one of the game's alternate Final Bosses.

Although the original Labrys doesn't make a physical appearance, it is mentioned that she has been kidnapped by F.A.N.G. and somehow managed to duplicate Labrys' Shadow-Self and mass produce Shadow Aigis.

Shadow Labrys, although being a fake Shadow, keeps the personality from its original Shadow-Self, working under the commands of Ouma, Shadowloo, Umbrella and Rebel Army.

In Chapter 39: Burn My Dread, Shadow Labrys alongside Shadow Aigis appears in the Tartarus proposing herself to unleash Nyx by destroying its seal to then destroy the world, knowing that her beloved one is being jeopardized, Aigis confronts both Shadows to protect what remains of him; finally, Shadow Labrys is destroyed for good, but not before reveal to Aigis that Labrys is fine but deactivated somewhere else waiting to be rediscovered, thing that would lead to the events of Persona 4 Arena.

Labrys is one of the characters of the game.

Labrys is one of the Persona Minions.

She is one of the female main protagonists.

She is one of the Persona 4 Arena/Ultimax characters.

Labrys is one of the game's playable characters.

Labrys appears as a playable unlockable character, she can be unlocked via winning 30 matches with either Nemesis or Jill Valentine (both from Resident Evil).

Labrys is planned to appear due to her mention in the timeline placement. 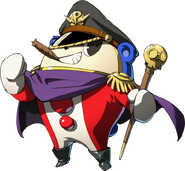 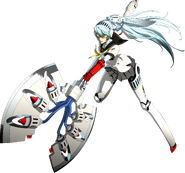 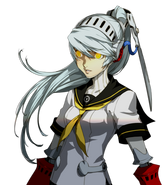 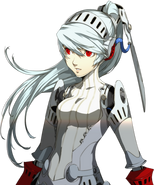 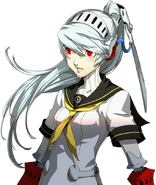 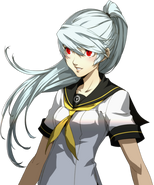 Labrys in and Persona 5: Dancing in Starlight 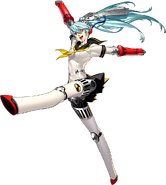 Labrys in Persona 3: Dancing in Moonlight 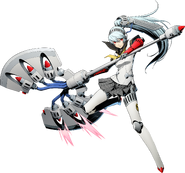