While it is not known to evolve into or from any Pokémon, it has two other formes, which are activated by using the DNA Splicers on it and either Reshiram or Zekrom, resulting in a process called Absofusion that removes Reshiram or Zekrom from the party until the fusion is undone. It will then become White Kyurem (with Reshiram) or Black Kyurem (with Zekrom). However, it is impossible to own a White Kyurem and a Black Kyurem at the same time, as the game rejects the second fusion of Kyurem with Reshiram/Zekrom.

Along with Reshiram and Zekrom, Kyurem is a member of the Tao trio, which exists in the legends of the Unova region.

As both Black Kyurem and White Kyurem, it is the version mascot of Pokémon Black 2 and White 2, respectively.

Kyurem is a gray and blue, bipedal Pokémon of indefinable but seemingly draconic basis. Clearly related to Reshiram and Zekrom, as it looks just like them, Kyurem has a blue head and snout and has yellow eyes without pupils, has a pair of pointed light bluish horns on its head and a yellow crest on its skull. Three pointed teeth jut out the bottom of either side of its jaws, which are frozen shut by the ice covering its head. Its long, gray neck has lines running around its whole body, legs, arms and tail. It has two arms, each with its own claw and each arm is jointed together from its oddly shaped blue wings, which are believed to be used for flying and storing cold air.

Each wing has two spikes of ice. The ice covering the wings can break, revealing gray tendril-like appendages on Kyurem's back. The right side of its body seems to be damaged in some way, as the wing and horn on its head on that side are shorter; the right side of its head also has a spiked edge near its jaw hinge that is absent from its left. Its legs are somewhat slender, and has three sharp ice-like claws on each enormous foot. Its tail has three blue conical spikes on its tip, and appears to be some sort of propulsion device or a container of energy; exactly what it is based on is unclear, but it may be a damaged turbine.

Ancient Unovan legends imply that Reshiram, Zekrom, and Kyurem were one Pokémon once, but after a conflict, it split apart into Reshiram and Zekrom, with Kyurem representing what was left. It essentially resembles a "broken" version of Reshiram and Zekrom.

However, in Black 2/White 2, Kyurem got a chance to fill in its holes via two alternate forms, White Kyurem and Black Kyurem, which are formed by combining with Reshiram and Zekrom, respectively, and share many aspects of their designs with them. It can use Absofusion on their respective Dragon Stones to change to White or Black Kyurem. When transformed into either, its legs are just like before, but shorter and the middle toe is now ice. As White Kyurem, it has some extra icy details on the legs.

Its tail resembles that of Reshiram or Zekrom, but they are attached to the body with three gray parts of skin. The tail is capable of movement and contains four holes: they are horizontal on White Kyurem and vertical on Black Kyurem. The torsos of each form are similar, but White Kyurem's torso is more slim than Black Kyurem's bulky torso. Its shoulders are covered in 'squares' of ice with two pins protruding from each which can come out and 'plug in' the aforementioned holes. As White Kyurem, it has thin arms with two rings and three claws each, wings between the rings on its forearms, and its right arm and wing are frozen.

As Black Kyurem, it has Zekrom's arms, but more muscular and without wings, and its left arm and wing are frozen. Its neck is the same shape, but is now upright; White Kyurem uses Reshiram's fur and Black Kyurem uses Zekrom's skin. In both forms, the ice covering one of Kyurem's jaws (upper for White Kyurem, lower for Black Kyurem) has partially disappeared, allowing it to move its mouth.

Kyurem generates a powerful, freezing energy inside itself, but its body became frozen when the energy leaked out. Due to an old legend, it may be assumed Kyurem may be hostile towards Pokémon and humans, due to the fact it supposedly ate them if they were found outside at night. Kyurem is an extraterrestrial Pokémon. It is the only Pokémon that can learn Glaciate, while its alternate forms White Kyurem and Black Kyurem can respectively learn Ice Burn and Freeze Shock instead. White Kyurem and Black Kyurem can also learn Reshiram's and Zekrom's signature moves Fusion Flare and Fusion Bolt, respectively.

Kyurem may be extremely infamous for having the shortest Pokédex entry in series history. Its White 1 Pokédex entry states "It can produce ultracold air. Its body is frozen."

In the distant past, Unova's three Legendary dragons were once one. This Pokémon represents the leftovers, a broken, down-and-out hack that longs for its former glory.

Fused with Zekrom, this Pokémon sets out to create an ideal world. Unfortunately, certain drama in liberal activist groups shows that there may have been an error in its goal...

Fused with Reshiram, this Pokémon sets out to create a truthful world. How it's become a favorite of neo-Nazis and white supremacists, then, is unclear...

Finally sick and tired of waiting for someone to fill in the "holes" in its body, Kyurem decided to patch itself up with an essence that is neither truth nor ideals. It has no concept of good or evil and will kill anything that crosses it.

Kyurem and its two counterparts Reshiram and Zekrom are based on the concept of yin and yang in Taoism. Kyurem, however, symbolizes wuji, the absence of yin and yang. In regards to overall design, it appears to be based on a theropod and a European dragon, similar to Zekrom. Its arms in particular seem to be influenced by Tyrannosaurus rex. Kyurem's type, Ice, may allude to the absence of energy and the concept of absolute zero. Kyurem's rock-like body and its origin story of arriving on Earth like a meteor are references to comets, which are largely composed of ice crystals.

Given that its Japanese name contains mu, it may be based on the koan mu.

Kyurem may be a combination of 冷 rei (cold), 急冷 kyuurei (rapid cooling), or 雪 yuki (snow) with the kana reversed, and 無 mu (nothing). It may also derive from 零 rei (zero). Rem may also mimic the rom of Zekrom and the ram of Reshiram. 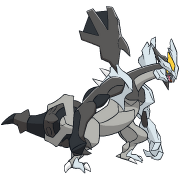 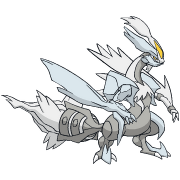