Kyle Earth is the main character in the Virtue series. He holds the virtue of Courage.

Kyle has always hated his society. Ever since he was a child, he was shunned for liking getting dirty, and picked on for listening to rap music. In his town, everybody is expected to act classy and professional, but Kyle has always disregarded this, and acted like a normal child.

On the day of his 14th birthday, his parents were brutally murdered, and Kyle witnessed it all. He ran away, and hid in a forest. He was found days later by the murderers, and right before being killed, he used a strange power that blasted the murderers away. He was later found, distrought, by Emily Clagon, and brought him to her house, where he met a team called Virtue that consits of her brother Jack Clagon, a boy named Cardis Ellong, and a girl named Jane Levi.

Kyle, along with Virtue, hunted down and supposedly killed Foron and his loyal minion, Dark Kyle, who murdered his parents and tried to kill him.

Kyle is a very shy person, and doesnt normally talk. Despite this, he likes going on adventures with his friends. He seems to have a crush on Emily, as suggested by his clumsyness and constant stuttering while around her.

He seems to love nature, as seen while in the forest with Emily. He also seems to love wildlife, as he came across a grizzly bear, and seemed very calm.

It also seems that he likes chocolate, as seen in a flashback on his life. 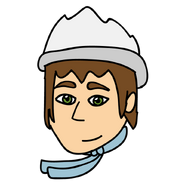 Christmas Mugshot made by Arend (t∣b∣c).
Add a photo to this gallery
Retrieved from "https://fantendo.fandom.com/wiki/Kyle_Earth?oldid=1721878"
Community content is available under CC-BY-SA unless otherwise noted.