After a war, a young child passes from it. The child was then revived and was told, to set out on a quest, to defeat the enemies of the war. They will go through forest, mountains, deserts, snow plains, volcanos and more, to make it to the end.

Hold down B Button: Aim Arrow (Release button to fire)

Bloddy Rock
Add a photo to this gallery 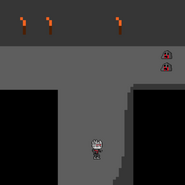 Stage Layout
Add a photo to this gallery
Retrieved from "https://fantendo.fandom.com/wiki/Kumo_Kumo?oldid=2283484"
Community content is available under CC-BY-SA unless otherwise noted.