A Kug is a Goomba-like creature originally planned to be included within Super Mario Sunshine, but was cut for unknown reasons. Kugs somewhat resemble a hybrid between Goombas and the similar Strollin' Stu enemy, and may have served as inspiration for the latter species. The Kug species has yet to appear in a real Super Mario title.

Kugs are very similar in appearance to Goombas, in that they have similar feet, body and head structures. They have orange heads shaped similar to a chocolate chip with large eyes topped with thick eyebrows and a mouth sporting two fangs pointing upwards, all resembling the appearance of a Goomba. They have a white body, as opposed to a Goomba's cream-coloured one, as well as feet that appear to be various shades of violet.

Kugs seem to have limited but definite control of electricity. In most games, they generate an electric field around themselves every few seconds as they walk. This electrification protects them from being stomped as the attacker will be shocked upon touching it. This attack pattern is comparable to how Hammer Bros. initially hold their hammers above their heads, preventing them from being stomped in much the same way. Kugs are also strong against the abilities granted by the Thunder Flower, whose thunderball attacks have no effect on the species.

Like most of Mario's foes, Kugs can be stacked on top of other enemies, and given Super Mushrooms to make them two times as large. A Kug with wings is known as a Para-Kug, and hops around between bursts of electricity, making it harder to dodge.

Kugs are very different in Super Mario: Elemental Journey and Super Wario Odyssey. As opposed to electrical control, they instead appear to be hosting some kind noxious black fluid inside of them, which they vomit out when spotting the player. Should Kugs be defeated or touched, they will shatter and leave behind a black pool of noxious fluid. The player is advised against touching it, as it will damage them. Kugs cannot be stacked as weight above them will shatter them and destroy the Goomba Tower above them and cannot be Captured.

Since the launch of the Kug Reintroduction Program, Kugs have gone on to appear in a wide range and variety of titles.

Kugs are introduced as enemy in this game. They look similar to Goombas but vomit out a black noxious fluid before running towards the player. They cannot be stomped without harming the stompee, as they explode into the black noxious fluid. A player can safely defeat them using a projectile or using some external measure to squash or destroy them. They have a crystalline appearance in this game.

Kugs return in Super Wario Odyssey, with the same abilities and strategies with dealing with them from their previous appearance in Super Mario: Elemental Journey. However, Wario cannot capture them due to Bowler causing them to shatter, and other Goombas cannot stand on Kugs due to them shattering under the weight. 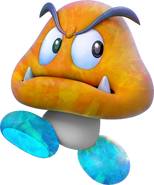 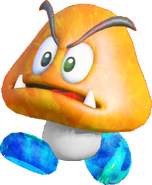 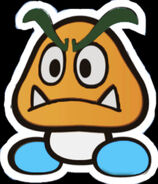 Fan Made Paper Kug (For a page made by RandomUser69420)
Add a photo to this gallery
Retrieved from "https://fantendo.fandom.com/wiki/Kug?oldid=3289430"
Community content is available under CC-BY-SA unless otherwise noted.