Krushas are large, muscular Kremlings that appear as enemies in the Donkey Kong series. They are members of the Kremling Krew, first appearing in Donkey Kong Country, being portrayed as hulking, intimidating enemies that are quite durable against damage. Their massive builds make them resilient against some attacks, such as Donkey Kong and Diddy Kong's rolling attacks and even Diddy's jump. The only way to defeat them is Donkey Kong's jump or a projectile, such as a barrel.

Krushas are blue in color, and wear green camouflage and silver wristbands. A rarer variant, being gray in color and wear blue camouflage, is even more resilient. Unlike the regular ones, these Krushas can only be defeated with projectiles, otherwise they will simply laugh off attacks.

A singular Krusha, aptly named Krusha, appears as one of the main characters in the Donkey Kong Country animated series, serving as a high-ranking member of the Kremling Krew and King K. Rool's bodyguard. Despite these high positions and responsibilities, he is fairly dimwitted, and has trouble grasping at simple concepts and is easily distracted. He is best friends with K. Rool's other high-ranking member General Klump, and the two often lead the Kremling Krew's schemes.

In Donkey Kong Country 2, a variant known as Kruncha appears. The main difference between him and Krusha is that he gets mad when stepped on. Kruncha is immune to both Kongs' jumps; only barrels, the Team-Up throw, and Animal Friends can defeat it. A faster red version appears in Castle Crush and Clapper's Cavern.

Krusha is a player on the Donkey Kong Wilds team on the multiplayer Wii sports game Mario Rugby League. He is a strong and speedy character with horrible skill. His special skill is to whack people with a club as an extended tackle.

Krushas appear in Super Mario Spikers as playable characters, appearing as Power-type Sidekicks. Their appearance doesn't change that much, other than the team's emblem being showcased on the belt, their camo suit changing color, and their silver gauntlets being replaced with golden ones. Their theme is a Hard Rock remix of the Voices of the Temple theme from Donkey Kong Country. One Krusha is also featured in the game's opening movie. 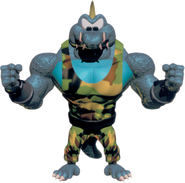 A Krusha in Super Mario Spikers
Community content is available under CC-BY-SA unless otherwise noted.
Advertisement