Kricketune (Japanese: リーフィア Korotock) is a Bug-type Pokémon. It evolves from Kricketot starting from level 10.

Kricketune is a bipedal Pokémon with an insectoid appearance. Primarily red, there are three black, oval markings on its abdomen, a tan streak running down its neck to its belly, and a tan underside with a small, dark red marking above it. It has oval, gray eyes and a dark red, round nose. Black feelers with curled tips extend from either side of its nose, similar in appearance to a mustache. On top of its head are two antennae with conical bases, spherical centers, and long, thin tips. Kricketune has two small feet and a pair of black wings. This Pokémon’s arms are shaped similar to its antennae and are crossed over its chest when it cries. It can also allow its cry to resonate in its belly. Kricketune's melodic cry varies greatly and can be used to signal its emotions.

Kricketune appears to be based on a violin beetle, as well as crickets because they make sounds by rubbing their arms on their abdomen. Its body resembles string instruments. It also resembles music conductors, due to its mustache and wings that look like a cape. 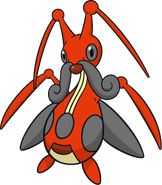 Dream World Artwork
Add a photo to this gallery
Retrieved from "https://fantendo.fandom.com/wiki/Kricketune?oldid=3200780"
Community content is available under CC-BY-SA unless otherwise noted.