Kracko is a recurring boss in the Kirby series. He resides in the Bubbly Clouds area of Dreamland and can control electricity.

Kracko is a cloud-like creature with a large eye in the middle of it which can spawn Waddle Doos. Kracko also has several yellow spikes on it's sides which it uses to attack Kirby. It's other form Kracko Jr. is the same large eye, but with four white spheres which orbit it.

Kracko is one of the most common occurring antagonists in the Kirby series, although having never been the main antagonist he does appear in almost every game only being outmatched in encounters by Whispy Woods.

Most of Kracko's apperances are generally the same with Kirby fighting Kracko usually after some ascent up a tower. Kracko uses predominantly Lightning and Rain to attack in combat. Kracko can fire off bolts of lightning in multiple directions, create beam-like energy whips that spin around him, unleash a blast of lightning beneath him, create a rainstorm to flood Kirby and perform swooping manuevers to charge directly at Kirby.

In Kirby Triple Deluxe, Kracko has a more advanced moveset than that of prior games, with added abilities that it makes use of primarily in its second phase. These include summoning a pair of giant drill arms and ramming across the arena in swooping and zig-zag patterns, turning grey and blasting out random garbage including a cannon, turning into a giant clound and unleashing multi-coloured rainbow onto the battlefield, firing off a high fire rate blast of energy orbs across the arena and summoning a giant energy orb and hurling it at the arena. Kracko reuses thiese attack patterns in the sub-game Team Kirby Clash, as well as its expansions Team Kirby Clash Deluxe and Super Kirby Clash.

In Kirby's Dream Land a variant form of Kracko, Kracko Jr. appears. Despite the name this form is actually the immature version of Kracko, this forms attacks are typically more limited than its adult counterpart. In Kirby's Dream Land 2 this form saw it receive a few additional attacks through its new ability to retreat into the clouds although this did not return in later appearances.

Mecha Kracko is a recreation of Kracko by the Squeak Squad member, Doc. This battle is wildly different from previous ones as Mecha Kracko can swoop down changing the landscape of the arena making it more hazardous. It also comes with its own array of attacks which are typically variants of the regular Kracko's attacks.

After sustaining enough damage it's revealed that Doc is piloting the Mecha-Kracko and a flight sequence ensues before the boss is defeated.

Kracko firing a bolt of Lightning 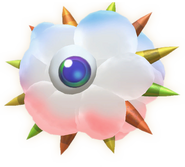 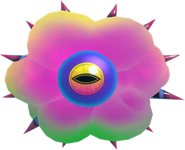 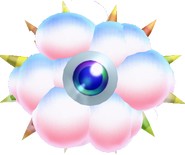 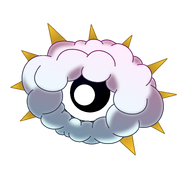 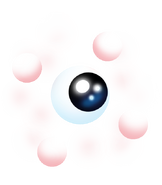 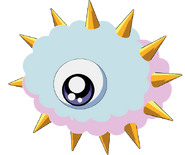 Kracko's appearance in Kirby: Right Back At Ya!

Kracko from Return to Dreamland
Community content is available under CC-BY-SA unless otherwise noted.
Advertisement