Kra;Gul was once a soldier for the Whdiaklz Millitary who left the area and was promptly hunted down due to believing the war to be and I quote, "The stupidest shit in the history of reality". He eventually made his way to the Rift Perimiter and after a fight with Fuz-Eil was thrust into the New Fantendoverse. He donated his DNA to the TriggerBound corporation for their bloodsport in other to get some money. His current whereabouts are unknown.

Although considered a pacifistic pussy by other Fire Demons in comparision to other species Kra;Gul is still a bit of a bloodthirsty fucker. He tends to avoid conflict and is allinall very lazy. 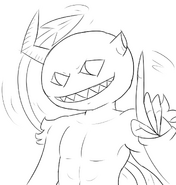 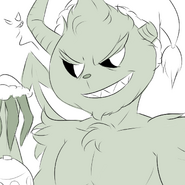 A sprite of Kra;Gul done by Sroo
Add a photo to this gallery
Retrieved from "https://fantendo.fandom.com/wiki/Kra;Gul?oldid=2388608"
Community content is available under CC-BY-SA unless otherwise noted.