“I don't even care that I have no shell on! I'm gonna show those Fuzzies what's what!”
— Kooper, in Paper Mario

Kooper is a Koopa Troopa that appears in Paper Mario. He lives in Koopa Village, a place inhabited by Koopa Troopas, though when Mario and Goombario arrive here in search of the Star Spirits, it is overrun by Fuzzies. After bringing back his shell, Kooper will join Mario's party, with his Shell Toss ability able to be used for attacking enemies, hitting Switches, and grabbing items. He is bold and adventure-loving, and idolizes Professor Kolorodo, an expert in archaeology. His abilities are similar to Koops in Paper Mario: The Thousand-Year Door.

Kooper is first seen in Koopa Village, when Mario and Goombario are chasing after the Koopa Bros. to find the Star Spirit. However, when they arrive, the village is overrun by Fuzzies, who are causing trouble for the resident Koopa Troopas by stealing their shells. Kooper happens to be one of the victims, and he begs Mario to help him get his shell back, as he is too embarrassed to be seen without it. Mario manages to reclaim the shell, though just as he is about to return it, Kooper appears, wanting to deal with the Fuzzies himself. Mario hands Kooper the shell, and he joins Mario on his adventure from then on.

In the field, Kooper can use his Shell Toss ability, where Mario can jump on his shell to send it flying forward before coming back to him. This can be used as an offensive attack against enemies, be used to hit Switches out of reach, or be used to grab items that Mario otherwise couldn't get. Shell Toss can also be used in battle, where he damages the first ground-bound enemy. He can also use Power Shell, which costs 3 FP, to damage all ground-bound enemies. When upgraded to Super Rank, he can use Dizzy Shell, which costs 4 FP, to inflict an enemy with Dizziness. When upgraded to Ultra Rank, he can use Fire Shell, which costs 5 FP, to damage all ground-bound enemies, dealing more damage than Power Shell. Additionally, Kooper has 1 Defense, meaning he takes less damage from attacks that happen to hit partners, though he will still be stunned if hit.

At the end of the game, Kooper is shown leading an expedition through Shiver City alongside Professor Kolordo, as he became the latter's assistant after Mario's adventure.

Kooper resembles a regular Koopa Troopa wearing a blue shell and matching boots. He also wears a red neckerchief around his neck, as well as red bands around his wrists. Like other Koopa Troopas, he wears a white tank top underneath his shell. He also has an "X"-shaped bandage on the right side of his face, though this isn't seen in-game in Paper Mario.

Kooper is bold and adventure-loving, and is always willing to travel. He idolizes the archaeologist Professor Kolorodo, and dreams of becoming an archaeologist just like him. He manages to accomplish this goal by the end of the game. As revealed through Goombario's Tattles, he and Kooper appear to have a friendly rivalry.

Kooper appears in Paper Mario: Stolen Worlds. In this game, Wario transformed him into a Partner Card, alongside the other partners Mario recruited on his adventures. After being found, he can be used in battle.

Kooper's attacks from Paper Mario can all be used in Stolen Worlds, and his Fire Shell attack can now sometimes inflict enemies it hits with Burn. He also has a new Omega Rank move called Mega Shell, which costs 33% of the total FP, where he summons a giant blue Koopa Shell and kicks it at enemies, damaging all of them and lowering their Defense by 1 for two turns. Kooper's Card Perk lets him protect an Ally in Danger or Peril with a Guard without losing a turn. This will not happen if more than one ally is in Danger or Peril, or if Kooper doesn't have enough HP to take the attack.

Kooper appears in Super Mario Spikers as a playable character, appearing as a Power-type Captain. He pilots a giant shell-shaped tank with his head on top, referencing the minigame Shell-Shocked from Mario Party 2, allowing him to shoot explosive cannonballs at opponents. His emblem is a blue Koopa Shell, and his theme is Psychedelic Pop.

Kooper appears in Super Smash Bros. Charged as a Partner Card summon. When summoned, he will use his Shell Toss attack, spinning forward with his shell and damaging opponents he hits, similar to Squirtle's Withdrawl. He will disappear after awhile, though he can be defeated by opponents' attacks. 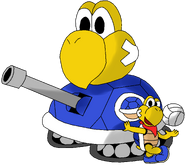 Dr. Kooper as he would appear in a Dr. Mario game.

Kooper in the style of a Mario and Luigi sprite.

Kooper as he was planned to appear in Thousand Year Door.
Add a photo to this gallery
Retrieved from "https://fantendo.fandom.com/wiki/Kooper?oldid=3257125"
Community content is available under CC-BY-SA unless otherwise noted.