Koopalings: The Game is a 2015-2016 episodic graphic action-adventure game developed by Telltale Games, AlphaDream, Nintendo EAD and Next Level Games, for several Nintendo platforms, and computers. The game includes many game genres, including platforming, beat 'em up, hack and slash and puzzle, as well strategy. In Japan, the game is called Kuppa no kodomo no o toiawase (クッパの子供のお問い合わせ), which translates to Koopa Kids' Inquiry.

A Season Pass Disc will be released on April 19, 2016, for all platforms that the episodes have been on (Wii, Wii U, 3DS and PC). It's a Limited Edition containing all four episodes, as well as several bonus/extra content; only 450 were made in the world, making it very rare.

Bowser loves his son, Bowser Jr. But... isn't he a l'il gushy ? Bowser is really to the point of ignoring his other children in favor of Jr. The Koopalings want to prove they're as important as Bowser Jr, but the castle soon gets attacked by Fawful's troops. All of Bowser's offsprings are abducted but Roy and Morton. The two set off to save their siblings.

Chapter I: I HAVE FURY !

Chapter II: I HAVE CHORTLES !

Chapter III: THE MUSTARD OF YOUR DOOM !

Boss Chapter: THE SANDWHICH OF GLORY !

The game ranges from two to eight (Wii U)/fourteen (PC)/four (3DS, Wii) players, minimum two in a level, which is CPU-controlled in the singleplayer mode. Each Koopaling has a health bar, which is refilled by eating meat, candies, sweets and other unwholesome food. Cherries refill the Staff bar, which, once filled, allows the Koopalings to unleash a overpowered attack. Vegetables cannot be eaten, but they can be thrown at enemies. Once the health bar reaches zero, the Koopaling will faint, and the buttons must be mashed to keep him awake. If failed, the Koopaling will be unconscious. The CPU will attempt to revive said Koopaling. Areas cannot be left if a Koopaling is swoon, forcing the buddy/other player(s) to wake him. Reviving Koopalings takes ca. 9 seconds to do. If both Koopalings are out of consciousness, the game ends. There are four main ways to faint in levels:

In timed levels, if time runs out, Fawful will appear with his "Headgear/Vacuum Helmet" and abduct the player characters, also resulting in a Game Over.

Koopalings have three attacks each. The first is a punch (a kick for Morton and Roy and a spinning attack for Wendy). The second is breathing fire (ground pounding for Ludwig, Roy and Morton, throwing rings for Wendy). The third attack is mostly a wand attack. Pressing the first and second attack buttons results in a attack which differs per character. Pressing all three attack buttons with a full Staff bar performs a overpowered attack (nothing if the bar isn't filled).

The Alt. Koopalings have two attacks each (not counting special abilities). The difference from the other characters is that this Koopalings cannot breath fire (explained by Mario as being too young for it, due to their dimension having different laws.). Their primary attack is spinning in a shell; the secondary attack is using a wand. Each Alt. Koopaling does a different attack with it, but the powers are the same as in the SMB3 episode 7 Continents for 7 Koopas. Lastly, special abilities:

Boom Boom can spin around and leave a trail of fire around when attacking. He can also learn new attacks, such as flying with wings, spin jumping and charging later in the game. Pom Pom has a Boomerang attack, and can learn high jumps, athletics and jumping up as a shell and crashing down later in the game. Bowser Jr. mainly uses his Junior Clown Car, but can also breathe fire, throw hammers, Bob-ombs and shells and perform high jumps later in the game. The Mini Bowsers attack using mechs and breathing fire.

Toad: The most common enemy in the game. They run around. That's it.

Green Yoshi: Runs around and attempts to eat you with his tongue. 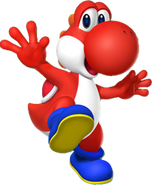 Red Yoshi: Spits random stuff at the player, attempts to hare away when apparoached. 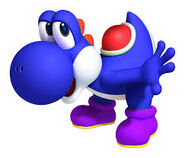 Blue Yoshi: Flies and attempt to crash land on the character.

Pink Yoshi: Spits fire. If it has a Toad riding on it, it'll spit three fireballs.

Blimp Yoshi: Flies in the air and rams into the character. 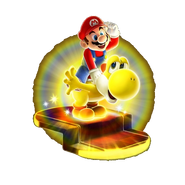 Dash Yoshi: Attempts to ram into the player's Koopaling(s), setting them on fire in the process. 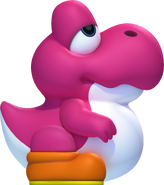 Balloon Baby Yoshi: Inflates and takes the characters with him. 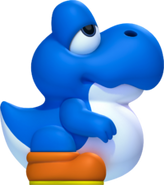 Bubble Baby Yoshi: The most dangerous Yoshi species in the game, he traps both Koopalings in bubbles, resulting in an instant Game Over. 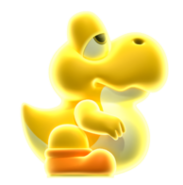 Glowing Baby Yoshi: Blinds the Koopalings(s), but, unlike Bulb Yoshi, weakens them as well. Go out of their sight, if you don't the Koopalings will fall asleep.

Mummy-Me: Attempt to mummify you.

Birdo: Attempts to suck you in, or shoot eggs/fireballs. 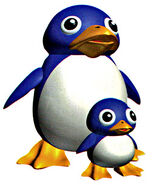 Big Pinguin: Chases after Koopalings, then attempts to run/slide over them. 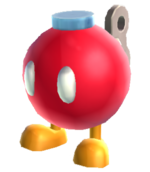 Bob-omb Buddy: Jumps on your back and implodes, or uses cannons to shoot you.
Add a photo to this gallery

King Boo and The Brain

Retrieved from "https://fantendo.fandom.com/wiki/Koopalings:_The_Game?oldid=3217560"
Community content is available under CC-BY-SA unless otherwise noted.