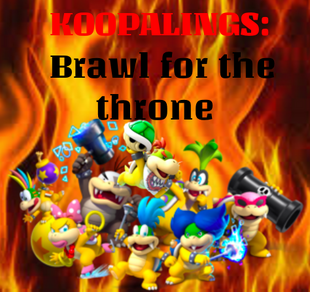 Koopalings: Brawl for the throne is a Fighting Game which has Koopalings (both canon and fanon) duking it out in a Smash Bros style game. It was released on the Nintendo 3DS, Nintendo Wii U, and the Nintendo Switch.

King 'Koopa' Bowser has began to worry about what would happen if he was to die for good. He decides to get one of the Koopalings to do the deed of ruling for when his "time comes". However, they all started arguing over who should be the one. So they hold a tournament: The best fighter wins the future throne.

The game is very similar to the Super Smash Bros. Series, where you must knock opponents off-screen to defeat them. There are two major changes, however:

In Klassic Mode, you must fight a bunch of enemies (along with a few mini-games) and fight the game's Final Boss, Dark Bowser. The mode changes depending on the difficulty:

Mini-Games are challenges in Klassic Mode. The Mini-Games include:

You can play these Mini-Games outside of Klassic Mode, too.

In Klash Mode, you must defeat every single playable character in the game with limited health items and with one stock. There order is randomized.

If you beat Klash Mode, you unlock Klash Mode Delux, where you still must fight every character in the game. However, not only is there no health items and only one stock, you then must fight Metal Mario at the end.

In Kingdom Konquest, you fight other people with randomly selected buffs or de-buffs. The winner "kaptures" a kingdom. The one with the most "Kaptured" kingdoms at the end wins.

Baby Bowser and Paper Bowser fighting with an item.

Poopbutt Koopa in Race to the Finish

The results screen with Wendy, Morton, and Paper Jr.
Add a photo to this gallery
Retrieved from "https://fantendo.fandom.com/wiki/Koopalings:_Brawl_for_the_throne?oldid=2976105"
Community content is available under CC-BY-SA unless otherwise noted.