Not to be confused with the Koopa Clown Car.

When operating it, the Koopa Troopa Car will accelerate automatically, so the player simply has to change what direction they drive in. They can also jump, allowing them to clear gaps. Driving into enemies can also defeat them, and even Meowser can be defeated by jumping on him with it enough times. Players must be careful while driving it though, as crashing it into obstacles such as walls three times will destroy the Koopa Troopa Car.

Koops drives a Koopa Troopa Car in Super Mario Spikers. It looks identical to the standard varieties, but with his emblem imprinted on the doors of the car. 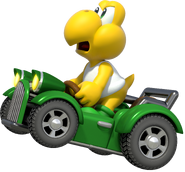 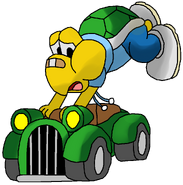