Koopa Troopas are common enemies in the Super Mario series that resemble a turtle. The y walk around on their two feet and if tapped twice on its shell, Koopa Troopa will spin around trying to home into the nearest person. They originally walked on four feet which is rarely seen these days. Usually, a Koopa Troopa has a green shell, but there are also red and blue variants as well as Dry Bones, a skeleton Koopa Troopa. Their Koopa Shell can be used as items.

Koopas serve as Bowser's main units in battle and as guards. The majority of Koopas guard territories claimed by their king Bowser over the course of the ages. They usually partake in siege on cities and during this, they plunder the cities' technology and riches for their own uses. The Koopa forces were also involved in the Battle for Devotee City, where the Koopas wiped out the Devotee guard toads and overthrew the Toadstool monarchy.

Koopa Troopa appears as one of ten subs in Mario Rugby League. He has all balanced stats and has no special skills at all. He is only used when a player on the Bowser Villains team is injured.

Koopa Troopa along with Paratroopa and Dry Bones are playable in Super Mario MHL. Koopa Troopa's shell also appears as an item.

He appears in this game on Bowser Jr's team. Ironically for a turtle, he has fast running, but weak pitching and batting powers. Red and Blue Koopas also appear, but their stats remain relatively the same.

He appears in Super Kooped Bros. as a basic enemy. Kooped also appears in this game, and he is a koopa.

Koopa Troopa is the mascot of the Koopa Kart Series, making an appearance as a default mid weight driver in each game. He will most likely appear in every game.

A soldier of the Koopa Troop, sick of being always defeated by the Mario brothers, so decides to get behind the wheel and is ready to see who is the fastest koopa.

In the game, Koopa Troopas are common, appearing in all levels. They must be stomped twice, once to push them into their shells and the second time to kick their shell. A Koopa boss named Koopa Servant who is fought in Bowser Castle.

If you use a Mario Amiibo whilst playing, you unlock the Cool Cool Mountain amibo mountain, the koopas appear as enemies.

Mario & Kirby: The Hope of All Realms

Koopa Troopas appear as enemies in the TV series about Mario and Kirby. Since the Koopalings were absent in the series, the Koopa Bris. and the Koopa Lids replace their act. Koopa Troopa, when inhaled by Kirby, give him the Shell ability where Kirby can hide in his shell that he has on his back and can use it to hit other enemies. This also hides Kirby from direct or long ranged attacks.

Koopa Troopas appear as enemies in Super Mario Moose. Like in past 3D Mario platformers, Koopas charge the player when they see them. When stomped, they will fall out of their shell, which can be grabbed and kicked. Koopas appear in all worlds in this game.

Koopa Troopas once again appear in Super Mario Moose Deluxe. They act the same as in the previous game.

Koopa Troopas appear as main characters in the game, with two of the game's main characters being Koopa Commander and Koopa Lieutenant. In the game, the two Koopas take part in Bowser's mission to try and steal a rare crystal from the Mushroom Kingdom.

Koopa Troopa appears as a referee at the Athens 2004 and Torino (Turin) 2006 Olympic Games.

Koopa Troopa is a lightweight character in the Koopa Kart series, being one of seven characters to appear in every game (the other six being Bowser, Dry Bones, Hammer Bro, Goomba, Monty Mole, and Paratroopa). His signature courses are Koopa Circuit courses, and his special item in Koopa Kart: Double Trouble!! is the Green Paratroopa Shell. 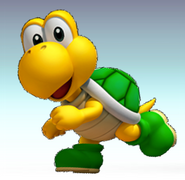 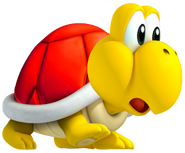 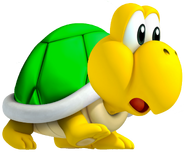 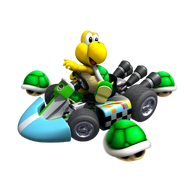 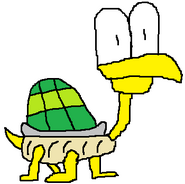 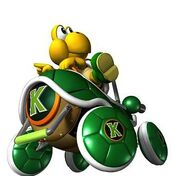 Koopa on his kart 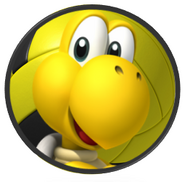 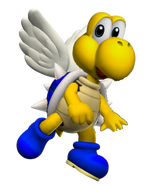 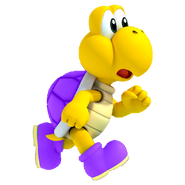 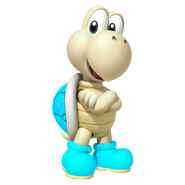 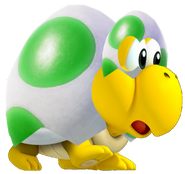 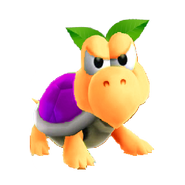 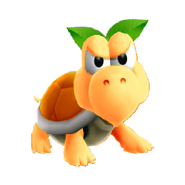 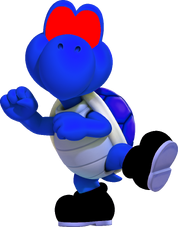 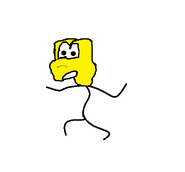