The Koopa Troop is the name given to the army led by King Bowser Koopa and their never ending chore to try and take over the Mushroom Kingdom.

The troops are Bowser's underlings that regularly appear as enemies throughout the Mario series, such as Goombas and Koopa Troopas.

The high- ranking members of the Koopa Troop (including Kamella and King Boo). 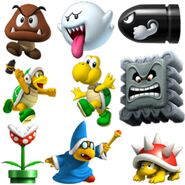 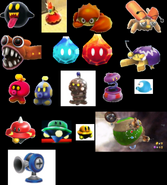