Koopa Kids (also known as Baby Bowsers, or in European countries Mini Bowsers, not to be confused with Baby Bowser) are minions of Bowser. Just like with Yoshi and Toad, there is one character, with a species of look-alikes. They are similar in appearance to both Baby Bowser and Bowser Jr..

Koopa Kids have seemingly been removed from the Mario Party series starting in Mario Party 8, likely in favor of Bowser Jr., who appears in Mario Party DS onward. However, they still appear in a plethora of fan material.

The Koopa Kids serve Bowser in the Mario Party series and appear to be behind some of the mini games, suggesting they have technical skill across the board. Earlier games suggested a son and father relationship between Koopa Kid and Bowser, however this quickly was retconned in later games to be just a henchman relationship. In Super Mario: Elemental Journey, it is re-established that Koopa Kid is a DNA son of Bowser. It is also established that Koopa Kid was forgotten by Bowser after he had Bowser Jr.. Since then, Koopa Kid has been searching for his purpose and found it in becoming a hero like Mario and his friends. It is hinted he has a precocious crush on Cosmetta.

Koopa Kid returns in the final Diaper Duty game Diaper Duty 10: Koopa Kid's Revenge here he has put together a team of villains with Kammy Koopa, Kamella and Petey Piranha and is trying to take over the Mushroom World and destroy his cousin Baby Bowser. He has his Magikoopa friends create a new power called the Ztar power which is stronger than the star power however he is still defeated and his Ztar power turns into the eighth-star power.

The Koopa Kid, are the grandchildren of Bowser, they're ready for the win and destroy everything with their Ladybug-Machines.

Koopa Kids make their first platformer appearance in Lets-a-go, Mario as regular enemies. Normally, they will just act as Bowser did in Super Mario Bros. except with a lot more speed and without hammers. Also, they can be stomped. However, sometimes, a Koopa Kid will split into three when the player gets near, with one red, one blue, and one green. The red one will chase the player relentlessly, the green one will stand still and breathe fire, and the blue one will jump around aimlessly.

As in Mario Party Advance, there can be 99 of them on the screen at once.

Koopa Kid used to be Bowser's son figure until Bowser Jr. came into the picture and he was seemingly forgotten about. Koopa Kid now wants to be a hero and help Mario and his friends.

After a long absence, Koopa Kid returns in Super Mario: Elemental Journey as a secret unlockable character. When the player defeats the Earth Baron, Nega Slantio, Koopa Kid becomes playable. Koopa Kid can breathe fire for a short amount of time before burning out and his ground stomps have a larger radius. He is surprisingly kind of fast but a lot of his moves reset his momentum.

Since Bowser Jr. has received a revamped moveset in this game, Koopa Kid appears as a semi-newcomer who uses his old moveset from Super Smash Bros. 4 and Ultimate. He retains his four special attacks, but he has a new Final Smash called Ztar Anomaly, which works similarly to Rosalina's Power Star except it severely weakens fighters who get caught in its range for ten seconds.

Koopa Kid appears as a starting racer in Mario Kart: V² Circuit. He is a lightweight with a small size. He has good speed, poor acceleration, slightly above average handling and slightly above good traction.

Koopa Kid is a playable character in Super Smash Bros. Galactic Battle via a palette swap of Bowser Jr. Koopa Kid, like the other characters switching out for Bowser Jr., has three of his palette swaps, being the Red, Green, and Blue Koopa Kids from the Mario Party games.

Much like Bowser Jr., the Koopalings, Boom-Boom, and Pom-Pom, Koopa Kid is encountered via several mid-boss battles in The Elemental Labyrinth. His role is unknown at the moment.

Used to be regarded as a son by Bowser, however this seemed like less and less the actual case. As he made more appearances, he was regarded to as a henchmen before being entirely forgotten. In Super Mario: Elemental Journey he was revealed to be a DNA son of Bowser, which explains more or less how there came to be so many clones of him. Also in said game, Koopa Kid becomes a hero to seemingly spite Bowser.

Barely knows him but hates his guts for replacing him.

Looks up to him and his friends as an example of how to become a hero. In Super Mario: Elemental Journey, Koopa Kid attempts to copy a lot of his and Cosmetta's poses.

Has more or less a hinted precocious crush on her. 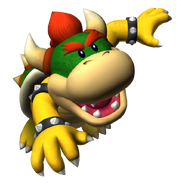 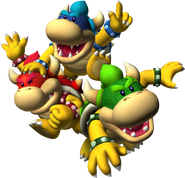 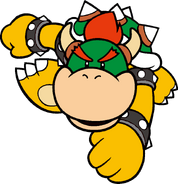 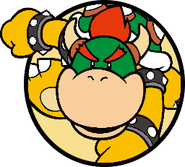 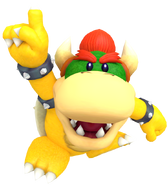 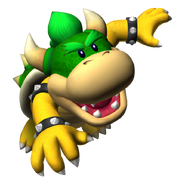 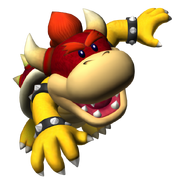 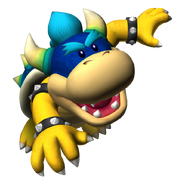 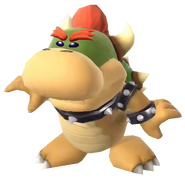 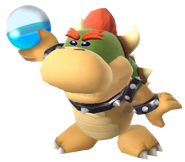 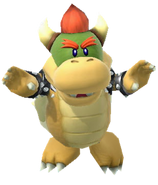 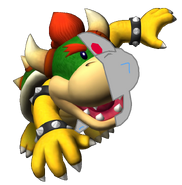 Cyborg Koopa Kid
Add a photo to this gallery

Retrieved from "https://fantendo.fandom.com/wiki/Koopa_Kid?oldid=3058459"
Community content is available under CC-BY-SA unless otherwise noted.