Konnichiwa Angels is a game developed and published by Extra Color Games. It is available for Purchase on the Nintendo 3DS eShop for the price of $4.99.

The object of the game is to catch the falling geisha women as they float down from the sky. To catch them, the player must simply tap them with the stylus.

The player has 5 lives. These lives act as the health meter. Failing to catch a geisha will result in 1 life being removed from your health meter.

As the game progresses, the levels become more challenging. The geisha women start floating down faster, and sometimes, samurai men will start falling down along with them. If a samurai is tapped, this results in 1 life being removed from your health meter.

Every time a level is completed, and during loading screens, the screen features interesting tidbits of information about Japanese culture, life, society, food, etc. Some information tidbits include, "For Japanese citizens, it is not uncommon to eat rice at every meal, including breakfast," or "Religion is not a prominent part of Japanese society in this present time, and many of Japan's people do not have a specific religion or set of beliefs of their own. Previously, however, Shintoism and Buddhism were the main religions of the country."

Other than facts, the tidbits of information can also be Japanese words and sentences along with their translations, to help non-Japanese speaking people learn a little bit of the Japanese language. 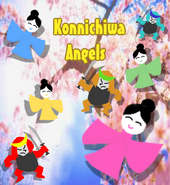 Samurai artwork
Add a photo to this gallery
Retrieved from "https://fantendo.fandom.com/wiki/Konnichiwa_Angels?oldid=1713561"
Community content is available under CC-BY-SA unless otherwise noted.