It evolves into Weezing starting at level 35.

Koffing is a spherical Pokémon filled with toxic gasses. It has vacant eyes and a wide mouth that usually has two pointed teeth in the upper jaw. However, a full set of teeth has been seen in the anime. Below is face is a cream-colored skull-and-crossbones marking. Several crater-like protrusions, which usually release a yellowish gas, cover this Pokémon’s body. Its purple skin is very thin, and over inflation can cause it to explode.

Koffing creates gases within its body by mixing toxins with garbage, and produces more gas in higher temperatures. These gases are malodorous and cause sniffles, coughs, and teary eyes to those around it. The gases are also lighter than air, allowing Koffing to hover. When agitated, it creates a more toxic gas and expels it through the holes in its body. As shown in the anime, Koffing's gas can be ignited by fire or electricity. Koffing is most often found in urban areas.

Considering its looks, its ability to float, and its tendency to explode, it may have been based upon a floating naval mine or living meteorite. It is also based on smog and other forms of air pollution. Koffing may also be based on the imagined fear that heavy pollution, caused by the leakage and/or improper disposal of toxic/radioactive waste, may result in the creation of new and undesirable life.

Koffing is a corruption of coughing. 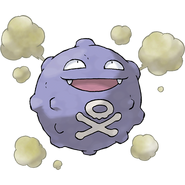 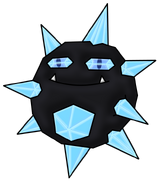 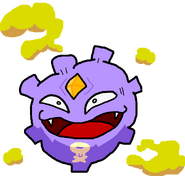