Klumps are large Kremlings that appear as members of the Kremling Krew, debuting in Donkey Kong Country as semi-common enemies. They have hard hats and because of that, are rather resistant against some attacks, such as Diddy Kong's jump. Other attacks, such as attacks from Donkey Kong, a projectile, and Animal Buddies can defeat them however. In later games, such as Donkey Kong 64, they can also throw orange grenades.

In their debut, Klumps have brown scales and military armor, such as boots, hard hats, and belts. Starting with Donkey Kong: Barrel Blast however, Klumps are much larger and obese, and have a wooden bucket on their heads.

A singular Klump, aptly named General Klump, appears as one of the main characters in the Donkey Kong Country animated series, serving as second-in-command of the Kremling Krew and King K. Rool's general. Because of his loyalty to K. Rool, or because the rest of the Krew is too dimwitted to be organized, Klump is often put in charge of K. Rool's schemes. Despite his tough, military-man like exterior, he is actually quite a softy in reality. Notably, despite most Klumps being depicted as brown, General Klump is lime green in color.

Klump appeared as a secret character in the multiplayer Wii boxing game Donkey Kong Knockout. He was a strong and slow character similar to the Chunky Kong / Kiddy Kong duo albeit a bit weaker and faster. In a reference to his memorable appearance in Donkey Kong 64, his special move was to throw orange grenades at his opponents, which would stun them.

To unlock him the game needed to be completed with Lanky Kong and Donkey Kong on hard mode.

Klumps return in Super Mario Realms. They will throw orange grenades at your character, like they do in Donkey Kong 64, and they will explode after two seconds upon landing. They can only be stomped to death by stronger characters, like Donkey Kong and Wario, but other characters can defeat them with projectiles.

Klumps make an appearance in Super Mario Spikers as playable characters, appearing as Offensive-type Sidekicks. Their design closely resembles that of General Klump from the Donkey Kong Country television series, being lime-green as opposed to brown. Their outfit consists of a spiked ring around their neck, similar to that of Bowser's, shoulderplates, and golden gauntlets around their wrists. Their theme is a Neue Deutsche Härte remix of the Misty Menace theme from Donkey Kong Country.

A Klump in its initial design. 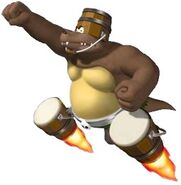 A Klump in its design from Donkey Kong: Barrel Blast onward.

A Klump in Super Mario Spikers.
Add a photo to this gallery
Retrieved from "https://fantendo.fandom.com/wiki/Klump?oldid=3225990"
Community content is available under CC-BY-SA unless otherwise noted.