He was created as a character for Donkey Kong Barrel Blast on the Nintendo Wii and then reappered on the boxing game Donkey Kong Knockout again, as a playable character.

Kludge appeared as a secret character on the multiplayer Wii boxing game Donkey Kong Knockout where he was a very strong character rivaling Funky Kong, however, he was also very slow. His special move was to hit opponents with a club.

He was unlocked by beating the game with Funky Kong once on Easy or Normal, and then once again on Hard or Intense. 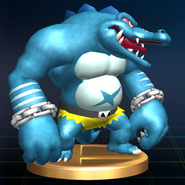