Klaptraps are small, quadrupedal Kremlings that appear commonly throughout the Donkey Kong series of games. They debuted in Donkey Kong Country as common enemies and members of the Kremling Krew. They move forward while snapping their humongous jaws over and over again. These jaws prevent Donkey Kong and Diddy Kong from using their rolling attacks on them, as direct contact with their teeth will result in damage. They are, however, vulnerable from the back. Other attacks, such as a jump or projectile, can also dispatch them.

Most Klaptraps are blue in color and have yellow markings on their backs. Rarer variants of Klaptraps are colored red. They act almost identically to the blue ones, but have the added ability to jump whenever the Kongs do, making it significantly more difficult to bypass them.

Klaptraps appear as playable characters in Super Mario Spikers, appearing as Power-type Sidekicks. They have been outfitted with large, metal jaws that make their biting capabilities more potent. They wear their team's emblem at the front of these jaws, and the colors of their scales change to match their team. Their theme is an Industrial Rock remix of the Cave Dweller Concert theme in Donkey Kong Country.

Klaptraps appear in Minion Quest: Strength in Numbers as units that can be used in squadrons. The are classified as Melee troopers, and attack by biting enemies. Being Melee troopers, they are strong against Ranged troopers but weak against Flying troopers. They have a high POW stat, but a low HP stat.

When the Koopa Cruiser is destroyed by the Blast-o-Matic, the Goomba Squad becomes separated. A group of Klaptraps surrounded Captain Shy Guy when he landed on an island chain near Crocodile Isle, and they must be defeated to rescue him.

A Klaptrap in Super Mario Spikers 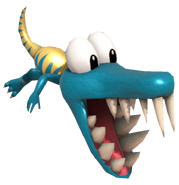 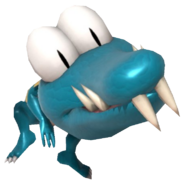