Kirby and the Star Planets (in Japan known as Kirby of the Stars: Heaven Rush/ 星のカービィ：ヘブンラッシュ and in Europe known as Kirby's Fun Pak 2) is a 2D action platformer Kirby game created by Nintendo for the Nintendo Switch. It was released worldwide on June 16, 2019.  It was developed by Nintendo,  HAL. Labortory.

Kirby and the Star Planets

One day on Planet Popstar, Kirby and Bandana Dee were having a simple Picnic out next to Kirby's improved house. However, Ribbon flew towards them and started crying. Not knowing why, Kirby walked up and looked at her with his head tilted. Ribbon said that the a lone Dark Matter attacked here and others on her planet, Ripple Star (however in game it first shows her and other fairies being chased by a black orb with a heart in the background). However, before she could say anything else a Dark Matter rammed Bandana Dee and started floating away. Kirby, being the hero he is, runs and tries to jump on it. Which proves unsuccessful. After that, the Dark Matter drills into the ground with a drill instead of an eye. Once it escapes, Ribbon says she got a call from the Fairy Queen about a BIG threat coming from Gamble Galaxy, worrying about the fates of the galaxies near it (this shown by the Fairy Queen holding a phone, with a black speech bubble being next the the queen showing a white and purple orb with a black eye coming out of gamble galaxy, with other galaxies around it). Then she explains that Kirby, Bandana Dee and her track down the threats and should get 9 legendary weapons from Popstar and the surrounding planets, including Ripple Star (this is shown by a cardboard Kirby, Ribbon and Waddle Dee standing on what seems like gold and weapons, with the Darkness around them poofing away). The camera zooms to Kirby, with him agrees to it with his belly thing from Kirby 64 and Kirby's Return to Dreamland. Then the camera zooms in on Ribbon's face, with going from sad to smiling. Then the camera focuses on Bandana, who agrees to it with a simple and while holding up his spear. Then the screen turns white. After the white fades, you can see Kirby and Bandana Dee running and Ribbon flying into the sunset. After that, the opening ends.

This game's visuals are combination of that of Kirby Super Star Ultra  and The Kirby Advance series (K:NiD , KatAM and K:SS), the charater sprites and foreground being KSSU styed and the backgrounds being styled of Kirby advance. The cutscenes are also KTD styled except being Switch quality, although the Ending cutscene is KSA styled. The gameplay is styled off KSSU, with multiple attacks for ALL charaters, Copy abilities (Yes, even Sleep and Light!) and Mixed Abilities. The music is modeled after KSSU.

These are the good charaters in the story down below.

Kirby is of course player 1's charater in Kirby and the Star Planets. He can inhale and get copy Abilities. Along with this average fact, he also has the bubble Mechanic (from Kirby Squeak Squad) and Combo abilities. Both the Kirby 64 and Kirby Squeak Squad formula being present for the Combo Abilities. He can Also create a helper like in Kirby Star Allies except he can only create one.

The 2nd player can play as the enemy charater player one makes friends with.

He is player 3's main dee. He uses his ever so iconic spear as his main weapon. But he can also use his Parasol from Kirby Battle Royal. Along with that he can pick up and throw enemy's like the characters in Super Mario bros. 2. That means you can stand on enemys instead of getting damaged, this is the same for bosses.

Meta Knight is player 4's charater for Kirby and the Star Planets. Unlike the other charaters, he is unlocked. He will be unlocked by beating him as the boss in world 1. His Gameplay is the same as all games that he was playable in the modern time, mainly Meta Knightmare Returns.

Ribbon is optional substitute for any of the charaters except Kirby. However Ribbon will be used as player 4 before you beat Meta Knight. Ribbon isn't able to walk or run due to her always flying during gameplay. Ribbon controls like Archer Kirby and Cupid/ Angel Kirby.

There are other charaters that exist in the story aside from playable charaters. For the main page, go here.

Reporter Dee is a Female Waddle Dee  charater that appears in Kirby and the Star Planets. She is a freindly Female Waddle Dee who is the cousin to Bandana Waddle Dee. She is a very loyal friend to her companion/ Best Friend, Recorder Waddle Dee. She works as a Reporter (obviously) for Popstar's News Channel. In game, she will hide somewhere between the Forground and the background, talking to a enemy charater. After you beat the game, you can play a Kirby Avalanche-styed mini game.

​​Recorder Dee is a Male Golden Waddle Dee that appears in Kirby and the Star Planets. He is a "grumpy" Dee, although in reality a wimpy Waddle Dee. He however is very nice to Reporter Dee because he has had a crush on her since the 5th grade. He works as (guess this!) a Camera Dee for Popstar's News Channel. In game, he'll appear along side Reporter Dee recording the situation. After you beat the game, you can play a Crane Fever-like mini game, although he'll play against you, trying to grab the 1-ups or 2-ups before you.

Rick  is a Male Hamster that has appeared in quite a few Kirby games as either a important or non-important charater. He works as a Owner and a Chef of his Buffet. In this game, he has a non-important charater. In-game, you can challenge him to a Gourmet race, however here it's called "Rick's Endless Buffet". But instead of 3 levels, you have 5.

These are unlocked modes during or after the main story mode.

This Extra Mode has the same idea from any other from the past. In this mode, you can't use the bubble selection or gain Copy Abilities through inhaling as Kirby. Instead, it's like KSS and KSSU's Milky Way Wishes , where you get Copy Ability Essence Deluxes. You also can't get Combo Abilities and Final Abilities (like the Star Rod). Also some Enemies are replaced with their counterparts (like Kabu and Grumples). Along with this Termina-two is replaced with a Zero Clone. Creative, I know (yeah it's cool to have a god clone as a final boss). Some levels are also redesigned entirely just to make it interesting. You also have a time meter, which before you start the extra game you can use this to have a optional time limit to beat the entire game (yes you'll restart the entire mode after if you decided to use this).

Nebula Stars Is a The Grand Cave Offensive / Kirby and the Amazing Mirror-like mode where you go look for treasure. There are 7 "areas" in this mode, each having 10 items. The only way to pass a planet/level/area is to collect them all! These are the areas:

Slide: A down or b down at the same time

These are what Kirby is mostly known for down below.

When you press - (for the Switch ver.) or the R button (for the X-experience ver.), you get the  Bubble Selection. Originating in Squeak Squad, this is a selection of collected Copy Abilities within bubbles. There are differences between the origanal and this new one. For one, there are 10 slots instead of 5. Also if you get all of the treasures of the Nebula Stars Extra game, you unlock 5 extra spaces.

Youtopia: Youtopia is a DLC world on the bottom-left of the planet selection map. It is a planet where YOU get to create 4 different levels and chose a pickable boss for your 5th level. Along with this, you can either chose or make music for your levels. This is basically Super Mario Maker + Mario paint but Kirby. Unlike Mario Maker, you can't share levels to the internet and it's impossible to create autolevels. This is also where you can play as Adeline/ Ado, where you play as her to test the level while editing it. You can also edit the Planet and level's icon, doing pixal art to do so. Keep in mind that you CAN'T change the planet's name, the name will always be Youtopia!

DLC Copy abilities: These are DLC copy abilities that you can only get on Lavadom and Last Star. You can also get it in Youtopia, if you place the enemies and mini bosses in the levels that is. Oh yea, your here for the copy abilities and their art, aren't you? Well they are: 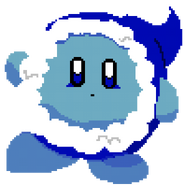 Old art for "Freeze Kirby from Kirby and the Star Planets" 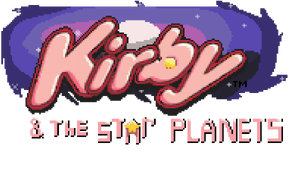 Some of the locations in the world Earth take place somewhere on Earth (what you expect?) . For example, Indiana isle takes place in a frozen over Indiana. Also everything in the level Eternity Fountain is a reference to the myth the Fountain of Youth.

Interestingly, King Dedede doesn't appear in this game at all. Not as a Playable charater, a mini boss, a boss or a Other charater.

The Artist Ability's "running" animation is based on Paint Kirby from the Kirby anime, Kirby Right Back at Ya!.

Sections 1, 6 and 7 of Upward hall are a reference to Level 7 of Dark Castle (from KDL2) when you go through those 5 sections with Copy Ability Enemies to get the Rainbow Sword, like in this game for Ripple Star and it's ledgendary weapon, the Soul Crystal.

Retrieved from "https://fantendo.fandom.com/wiki/Kirby_and_the_Star_Planets?oldid=2864716"
Community content is available under CC-BY-SA unless otherwise noted.