In this game, Kirby and his friends must fight off an alien force known as the Timeless, beings that don't understand time and feel they must make everyone else understand them like that, by destroying the titular Eternal Clock resting above Popstar.

Due to not being a platformer, certain mechanics from the normal Kirby games make a return, but changed slightly.

Kirby and the Eternal Clock plays a lot like the Mario & Luigi games, it is an RPG with platformer elements, the player gets a range of actions to perform in the overworld, such as jumping, talking to NPCs and floating with Kirby, although that ability is limited to only a few presses of the jump button before Kirby must fall back down. In battle, characters have access to various skills based on their unique traits, Kirby can use his copy abilities, Dedede can hammer foes, etc.

In the overworld, Kirby and two other party members are controllable, those two others are able to be changed at any time through the menu. Kirby has access to his inhaling ability for puzzles, along with jumping and flying for platforming challenges. The other two party members can be swapped to at any time, and they have their own overworld skills to be used for puzzles and platforming, for example, Bandanna Dee can use his spear in various ways, Meta Knight can chop up certain blockades, Marx allows the player to quick travel anywhere at any time, etc.

Throughout the game's world, there are certain things and people to interact with, such as merchant Waddle Dees and Doos that give you different equipment in exchange for enough Stars, and Star Rod statues that allow the player to quick travel between parts of the world. That is not to mention the many important items and setpieces that must be interacted with in order to progress.

When the player touches an enemy, a battle is started, the character with the highest SPD (Speed) stat acts first. In battle, the player can: Attack normally, use a Skill, use up their Goods (Items) and in Kirby's case, he can also Inhale weakened enemies to finish them off or to get their copy ability. If the player doesn't feel like battling the enemy, they may also Escape the battles, but they get no rewards from it.

Different attack effects can happen at random, for example, Critical Hits, which deal more damage than normal, and Misses, which, as one can expect, are simply when an attack doesn't connect and deals no damage. There are also unseen stats, only triggered by certain items and moves, such as Weight, which dictates how a character is able to move in battle, if they are heavier, their attacks might be slower than their normal weight or when they are lighter, and the character's Crit. Rate, which is how often their attacks will be Critical Hits.

The player gets a few different rewards from winning battles, certain enemies carry items, and they are sure to drop plenty of Experience Points and Stars to use to buy new stuff.

There is somewhat of an element system, like in Pokemon, but it is not as enforced and clear, for example: An attack from the Water ability has a higher Critical Rate on enemies based around fire, and the Fire ability has the same effect to enemies based around ice and so on and so forth in a rather non-linear weakness line (Or set of weakness lines)

Obtaining copy abilities in Eternal Clock is similar to catching Pokemon in, well, the Pokemon series. First, Kirby must weaken the enemy to about a third of their full health, and then he may use the Inhale command to eat the enemy and take their power. Copy abilities also work like in the Super Star (Ultra) game Milky Way Wishes, where the powers are permanently stored in a menu upon being collected once, so Kirby can switch on the fly to the best ability for an upcoming boss or general area. Much like in the main Kirby games, certain enemies have no abilities, and thus, they give off a "No Good". A full list of the game's abilities is given further below.

DISCLAIMER: The story is not divided in any way, this was just a simple way to organize this section

Long ago, in a distant planet, creatures evolved and grew without the concept of time, they did not understand such a thing, and envied those who did, to the point where they had to make it so that nobody else truly knew time. Eons later, a group of these beings, calling themselves the Timeless, traveled through the depths of space to find an ancient temple known as the Eternal Clock, which, supposedly, kept all of time in the universe in check, and this quest lead them to Planet Popstar, the home of Kirby and many others, where they finally found this elusive Eternal Clock, floating above the planet. They had made it that far, they weren't going to stop until the clock was destroyed and time itself was over for everyone else.

On the surface of Popstar, in a forest in Green Greens, Kirby and Bandanna Dee were having a friendly picnic in a clearing, until the Timeless attacked and made the ground shake, dropping Kirby's freshly cut slice of cake on the grass, where it was quickly stolen away by a few ants. Furious with this, Kirby looked up at the sky, to see the Timeless' elaborate ship of cogs and pistons flying above them, firing at the Eternal Clock as it approached the place. Kirby and Bandanna Dee knew they were trouble and rushed into the forest to find a way back out to get into action.

After some exploring, the two of them met up with Whispy Woods, who was unreasonably angry with them, claiming Dedede wouldn't let Kirby go through and ruin his plans. The two of them found this odd, but they had to defeat Whispy to get out, so they did. Finally out of the forest, Kirby and Bandanna Dee saw many Waddle Dees rushing from the different corners of Green Greens to deliver food to Castle Dedede, so, that was their next stop. 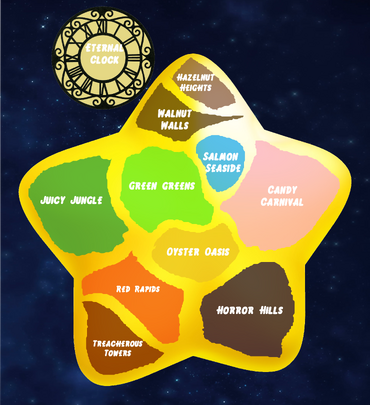 Below is a full list of all the areas around Popstar seen in this game.

Retrieved from "https://fantendo.fandom.com/wiki/Kirby_and_the_Eternal_Clock?oldid=2635915"
Community content is available under CC-BY-SA unless otherwise noted.