Kirby and the Distorted Realm is a game by Power Paintbrush Productions, to be released on the 3DS sometime 2016.

In Summer 2017, a Version of the game for The V² was released. The game was essentially the same, but the player uses the Right Thumbstick to move the "Rainbow Cursor", and hold down the right trigger to draw Rainbow Lines and the left trigger to erase Rainbow Lines.

Kirby was going on a typical stroll through Dream Land, just as any other day went by. Flying on gliders, fishing, and other fun activities were more than enough to wear him out. On his way home, however, he stumbled across a mysterious figure that looked suspiciously like Dark Meta Knight. The two began to duel - but Kirby couldn't win. When he regained consciousness, he discovered he had been split into four, and was lost in a realm entitled Distortia...

On the player's journey through Distortia, Kirby cannot inhale nor float. In order to gain a Copy Ability, he must be struck by an attack that corresponds to that Copy Ability, or use a Copy Essence. The player can also use the stylus to draw paths for Kirby to take, walls to block attacks, and so on and so on.

Unlike other Kirby games, where each world only has one boss, starting from Sweet Seaside several boss stages may appear in the worlds.

In addition to the worlds listed here, a "Tutorial World" appears whenever you start a new Save File. This world consists of a single cloudy stage and has no bosses whatsoever.

When struck by a special attack from certain enemies, Kirby will gain a Copy Ability corresponding to that attack. While you have a Copy Ability, you can press Y to exchange that Copy Ability for a Helper.

When playing the 3DS Version of the game on a New 3DS System, it is possible to load amiibos of characters from Super Smash Bros. 4 in order to obtain a Copy Ability. Below is a list of amiibos and what ability they grant.

How to Animal Friend

When an Animal Friend shows up in a stage (Usually if the player has been repeatedly losing lives), Kirby can tag-team with them, enhancing the already versatile effects of his Copy Abilities.

Each Animal Friend travels with Kirby in his or her on way...

Animal Friends will stay with Kirby until he loses a life, or until the stage ends.

There are four stages here. The player is constantly walking along the stage, and must press A to Jump and B to attack. A gauge will appear with a cursor moving left and right along it. B will stop the cursor and launch an attack.

Stop the cursor in a red area to launch a Red Attack. The attack you launch is random, and the damage is multiplied by Kirby's level.

Stop the cursor in an orange area to launch an Orange Attack. Again, the attack you launch is random, and the damage is multiplied by Kirby's level.

Stop the cursor in a pink area to launch a special Pink Attack. Once again, the attack you launch is random, and the damage is multiplied by Kirby's level. Additionally, using a Pink Attack will restore a small amount of HP.

Defeating enemies earns the player EXP, which can be used to level up (maximum level 5). The damage dealt by Kirby's attacks is multiplied by his level. Each of four stages has three themes...

Enemies appear randomly in the stages and must be defeated or avoided (although for the sake of collecting EXP, killing them is preferable). You have 100 health which is depleted when you're attacked, and Game Over occurs if you run out of health. At the end, a boss is fought, and must be defeated. The battle revolves around turns - you must consistently use attacks to beat him. In boss battles, blue sections appear on the gauge, and stopping the gauge there causes the boss to attack you. Your health in boss battles is 100 times your Level.

Chef Kawasaki, Max Flexer and Chef Shiitake also appear as "mini-bosses". You must defeat them before they defeat you. Once you defeat them, your health will be fully restored. 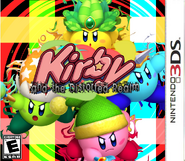 Boxart for the 3DS version.

Boxart for the V2 Version. 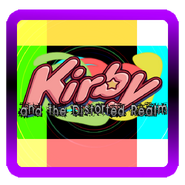 Game icon.
Add a photo to this gallery

Retrieved from "https://fantendo.fandom.com/wiki/Kirby_and_the_Distorted_Realm?oldid=3244847"
Community content is available under CC-BY-SA unless otherwise noted.