Kirby Tilt 'n' Tumble 2 is an upcoming Kirby action puzzle game for the Wii U developed by Shooting Star Studios. It is planned to be released in late 2016. It is a sequel to the 2000 Game Boy Color title Kirby Tilt 'n' Tumble. Being a direct sequel to said game, it brings back the “tilting” gameplay with the use of the Wii U GamePad. The game will of course have Kirby as the playable character, but it will also support amiibo, allowing players to unlock King Dedede, Meta Knight and Bandana Waddle Dee by using their respective amiibo.

A mysterious wizard named Bahram arrives at Pop Star and casts a curse on Dream Land to turn it into a “rolling” entertainment for him. Because of this curse, all of Dream Land turns into a tilting land, causing most citizens to trip over and roll. Kirby is bugged by this, and decides to go after Bahram in order to restore Dream Land's original form. 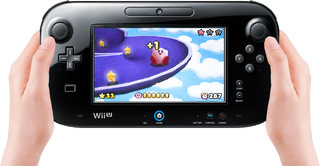 Point Stars will be scattered all around levels for Kirby to collect, and he will have to find the Red, Green and Blue Stars in each level in order to clear them. Certain levels (mostly the last ones in each world map) will feature a different boss that Kirby has to defeat so he can go to the next world map. Several enemies will appear in levels, and to defeat most of them Kirby will have to hop on them or dash at them. To hop around, the player will have to press the

button, and to dash, the

button. A dash can also be charged by holding the

button to make it more effective against stronger enemies.

However, there are enemies that cannot be defeated with a simple hop or dash, and require something else in order to be defeated. As an addition to a Tilt 'n' Tumble installment, Kirby can now use some Copy Abilities in this game to defeat special enemies. However, to do so, he will have to find Copy Ability pedestals as he lacks the inhale ability in this game. Gaining a copy ability will replace the hop and dash with different attacks. For example, if Kirby becomes Fire Kirby, the hop ability will be Kirby getting encased in fire for a few seconds, and the dash will be a fiery version. Copy abilities are also needed to get past certain obstacles, such as ice blocks (melted by Fire Kirby) or lava pits (traversable by Ice Kirby's dash).

Unlike other games, Kirby doesn't obtain a Copy Ability by inhaling an enemy. Instead, Copy Ability pedestals can be found in the levels, and by touching them, Kirby gains the ability.

The game's box art.
Add a photo to this gallery

A promotional poster of the game.
Add a photo to this gallery
Retrieved from "https://fantendo.fandom.com/wiki/Kirby_Tilt_%27n%27_Tumble_2?oldid=2130228"
Community content is available under CC-BY-SA unless otherwise noted.