The game works this way, it's a 2D platformer, but, with one difference, one of the Kirby's main powers is to swallow enemies, he can throws the enemies (in a form of a star) into other enemy, also, there's some enemies which if Kirby swallow and "eat" him, can give a power to kirby, nicknamed "Copy Abilities", there's many Copy abilities, in each sub-game, there's some differences, a example is in Milky Way Wishes, Kirby can't get copy abilities from the enemies, instead, he has to catch Copy Essence Deluxes which are hiding on the levels.

“Oh no! King Dedede stole all the food in Dream Land! It's time to a pink hero comes back and defeat him once again!”
— Spring Breeze's Story.


Spring Breeze is the first sub-game of Kirby Super Star Supreme, at start, it's the only sub game available. This is sub-game is kinda a remake of the original Kirby's Dream Land with new additions, like Mr. Frosty as a boss. Spring Breeze is more longer now, some areas cutted from the original Kirby's Dream Land are back. The objective is to defeat King Dedede. Beating this subgame unlocks three other subgames, Dyna Blade, The Great Cave Offensive and Gourmet Race.

“A strange giant big metallic bird appeared in the Dream Land, he/she is scarying everybody on the Dream Land! What he/she wants? It's time to Kirby discover!”
— Dyna Blade's Story


Dyna Blade is one of the three sub-games which are unlocked after the player beats Spring Breeze. This is the first subgame to features a map, the objective is to reach Dyna Blade and defeat him/her. This minigame has two secret levels, which are giant rooms with tons of abilities to the player chooses. Beating this subgame, The Great Cave Offensive and Gourmet Race, the player unlocks the "Revenge of Meta-Knight" subgame.

“Kirby was walking and suddenly he falls in a hole! He got trapped, now it's time to him found a way out! He doesn't expected, but, during this journey, he will found some valiauble treasures...”
— The Great Cave Offensive's Story


The Great Cave Offensive is one of the three minigames which is unlocked after you beat Spring Breeze. The objective of this subgame is find every 90 (30 new treasures) in the levels. At the end, the player has to defeat Wham Bam Rock. Beating this subgame, Dyna Blade and Gourmet Race, the player unlocks the "Revenge of Meta-Knight" subgame.

“King Dedede and Kirby are on a fight for food! Who will win a gourmet race?”
— Gourmet Race's Story


Gourmet Race is one of the three minigames which the player unlocks after beating Spring Breeze. Gourmet Race is more like a minigame, where the objective is win a race against King Dedede. The objective is see who collects more food during the race. The normal food gives one point and the Maxim Tomato gives ten points. There's 3 courses, if Kirby win a race, he will get 30 points at the end. It's pretty simple. Beating this subgame, Dyna Blade and The Great Cave Offensive, the player unlocks the "Revenge of Meta-Knight" subgame.

Revenge of the Meta Knight


Revenge of the Meta Knight is one of the subgames present on KSSS, it's unlocked after you beat Gourmet Race, The Great Cave Offensive and Dyna Blade. In this subgame, the objective is to defeat Meta Knight, is the only subgame which has time, if the time runs out, game over. Beating this subgame unlocks Milky Way Wishes.

“The Sun and the Moon are fighting! The Pop Star Universe is becoming a chaos! Marx tells to Kirby to find Nova and make wish to make the chaos stop!”
— Milky Way Wishes' description.


Milky Way Wishes is the longest sub-game in KSSU, it's unlocked after you beat Revenge of Meta Knight, Kirby has to travel between worlds and complete them, Kirby can't get copy abilities from the enemies, he was to find Copy Essence Deluxes, the best way to start this sub-game is going to ??? and catch the Copy ability. After you beat this, you unlock The Arena.

“Kirby have the chance to beat all his enemies once for all and won the prize, will he finish this mission?”
— The Arena's Description.


The Arena is the first Arena in the game, and it's unlocked after you beat Milky Way Wishes. This is the last game of the original eight. In this minigame, you have to beat all the bosses in a random order to win. Defeating this minigame unlocks Revenge of the King.

Revenge of the King

“After his defeat in Spring Breeze, King Dedede wants his revenge. Will Kirby stop the maddened king once more?”
— Revenge of the King's Description


Revenge of the King is a remake of Spring Breeze with much harder difficulty.  To unlock this you need to beat the Arena.  Green Greens, Float Islands, Bubble Clouds and Mt. Dedede are replaced with Purple Plants, Illusion Islands, Crash Clouds, a new level called Mt. Dedede Sky, and the Revenge.  Most enemies have been replaced with much harder enemies which makes the levels more difficult.  Passing this subgame, Meta Knightmare Supreme, and Helper to Hero unlocks Meta Knightmare Supreme.

“You have to prove yourself, helper, that you're a hero! Fight off against 20 enemies and prove yourself heroic!”
— The game's description

Fly of the Lor Starcutter (NEW!)

“The solitary Waddle Dee decides to take a journey to free his friends from the evil Lord Dedede, he decide goes into a quest, along her partner.”
— Dee Quest's description.


Dee Quest  is one of the two mingames that you play with other character, in this case, Swordsman Dee is the newest playable character, replacing Kirby, he re-plays all the roles from Kirby in the new minigames from KSSU. It's unlocked after you beat Legendary Wing. Also, Waddle Daa appears as the partner of Swordsman Dee.

Kirby from the Stars' Quest (NEW!)

More info about them here here. 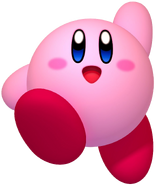 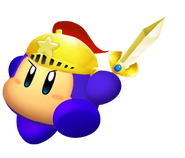 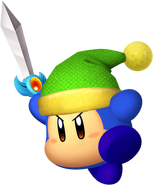 Swordsman Dee by Doh (t∣b∣c).
Add a photo to this gallery

Retrieved from "https://fantendo.fandom.com/wiki/Kirby_Three-Dimensons?oldid=1968718"
Community content is available under CC-BY-SA unless otherwise noted.