Kirby Fighters: Tournement is a fighting platformer multiplayer game for 2014 for the Wii U, developed by HAL Laboratory and published by GreenStar Studios. This game looks similar to Kirby Fighters from Kirby Triple Deluxe. Unlike the game, though, this game have amount of abilities from the past Kirby games and it also feature different fighting modes. This games has also a similarity between the Super Smash Bros. series. Additionally, this game can be also played up to 8 players.

The gameplay is very similar from Kirby Fighters (Deluxe) of Kirby Triple Deluxe. But there's much new content in this game: new abilities, new stages and new items, including story mode and more.

This mode is similar to Kirby Fighters (Deluxe). You must surpass 15 rounds to the final and unlock alternate costumes or abilities.

This mode is a little different than other modes because the player cannot longer choose an ability. Due to that, during in the stage, while starting, the player will start as Kirby, without an ability. Kirbies are only allowed to inhale, dash, walk, jump and tackling. After 10 seconds, it will fall 10 random abilities above on the screen. The objective is that Kirby must inhale an ability and turn into that so he can attack the others easily. The other abilities will fall under 30 seconds.

Tag allows the player to "play tag" with others. When the player's dead, he will turn into Ghost Kirby and can touch his opponents to be alive again. Otherwise, the opponents can attack Ghosts to prevent from being touched. Who remains as last is the winner of this mode.

This mode allows the player to collect stars as many if possible. There's so many stars: a yellow star; it's worth 1 stars, a green star; 10 stars, a red star; 30 stars and the rarest one is the blue star; it's worth 50 stars. If a player has been attacked, he lose some stars and these falls to the ground. Who haves the most, wins.

This mode is almost similar as Super Smash Bros. Series.

This sub-game allows the player to test the player's skills. It's similar to Kirby's Return to Dreamland.

Allows the player train with a Metal Waddle Dee. It won't hurts you. There's also some tutorial steps avaiable.

To see the list of different abilities of this game, see here: TBA

They are in total 14 abilities. Beetle and Bell are now startable. Fire and Spear are new in this game.

These are all new in this game, including Crystal, Axe and Mace. Unlocking methods will be written soon...

Theses abilities can you only use temporary.

To have these abilities, it must level to 3 for some normal abilities rensambling of these.

DLC's are in Nintendo eShop. You can have these if you played all the modes and the tournement. They have a meaning like: Mario is the mascot of Nintendo or relasing and upcoming games. Not all the games will be in this DLC list. These are all from Nintendo.

All these stages are returning from Kirby Fighters (Z) but the design and the layout changes. 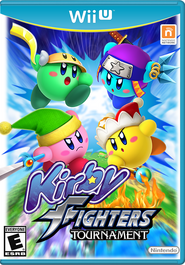 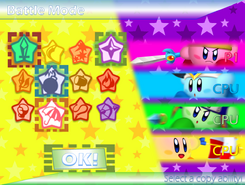 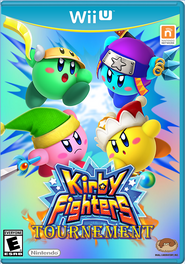 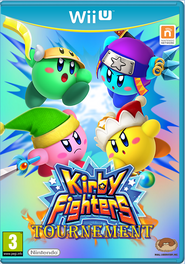 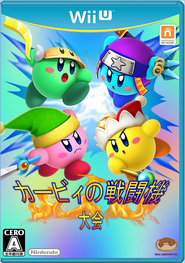 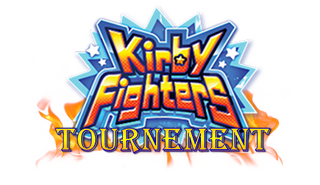 The logo of this game. 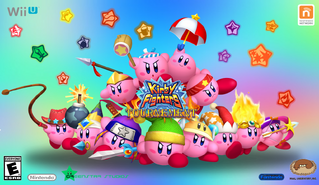 Wallpaper of this game. 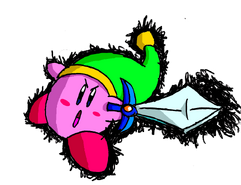 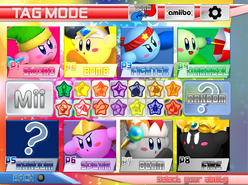 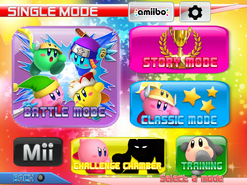 Single Mode Menu
Add a photo to this gallery
Retrieved from "https://fantendo.fandom.com/wiki/Kirby_Fighters:_Tournament?oldid=3202067"
Community content is available under CC-BY-SA unless otherwise noted.